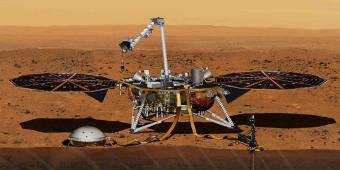 The NASA Mars InSight Lander is en route to the Red Planet and two Colorado School of Mines scientists are among those eagerly awaiting its arrival in late November.

Paul Morgan, senior geothermal geologist at the Colorado Geological Survey, and Ebru Bozdag, assistant professor of geophysics, are members of the science team for the international research undertaking, the first mission dedicated to seeking geophysical information about another planet.

"There have been many rovers and missions to Mars, but they've concentrated on understanding the surface geology," Morgan said. "We can learn a lot from that, but the InSight mission is focusing entirely on the interior of the planet."

To do that, the InSight lander is equipped with three pieces of scientific equipment: a seismometer (SEIS), a Heat Flow and Physical Properties Probe (HP3) and the Rotation and Interior Structure Experiment (RISE).

Morgan worked on the heat probe, serving as one of three U.S.-based co-investigators on the project. Designed in the U.S. and built in Germany, the probe will hammer 16 feet into the Martian soil, or regolith, to measure the heat coming from the planet's interior.

"Heat is the driving energy for tectonics on Earth. Mars doesn't appear to have plate tectonics, but it does appear to have had volcanism very recently," Morgan said. "We want to know where it is in that stage."

The hammering process will take a month to six weeks, as the probe pauses every half meter to measure the thermal properties. Once it reaches its final depth, the probe will track temperatures for roughly one Martian year, or 687 Earth days, in order to get an accurate measurement, he said.

An expert in geothermal energy on Earth, Morgan helped design the probe with engineers at the NASA Jet Propulsion Laboratory (JPL) in California. A major part of his role was conducting terrestrial experiments, in remote areas of the Upper Arkansas Valley in Colorado, to try to simulate the conditions the probe will likely encounter on Mars and help validate the computer models developed at JPL.

"There are a lot of things that you may not think about instantly, but when you're designing something and you only have one chance at the experiment you have to think about every possible thing that could happen," Morgan said. "As I've been doing this for 40 years, I've measured just about everything that can happen on Earth. I don't know everything that could possibly happen on Mars. But with colleagues who have worked on planets and engineers who have designed just about anything that can happen on planets, we get together and use everyone's expertise. It's a collaborative effort."

The same goes for the seismometer, which will record "marsquakes" and other seismic disturbances in hopes of answering questions about the crustal dichotomy between the southern and northern hemispheres, the size of Mars' core and the relationship between that core and the planet's lack of magnetic field, Bozdag said.

"We have no idea what kind of data we'll get from Mars — it's the first time we're hopefully going to receive meaningful seismic signals from a planet other than the Earth and the Moon," she said. "Seismology is our primary tool to see planets' interiors. For Earth, we use earthquakes. For Mars, we'll be using marsquakes if there is enough seismic activity, meteorite impacts and other seismic sources, such as dust devils."

A global seismologist, Bozdag got involved in the InSight project while she was a postdoctoral researcher at Princeton. When she moved to the University of Nice in France, she was also supported by the primary investigator for the seismometer, Philippe Lognonnè at the Institute of Earth Physics of Paris, to continue her work on 3D seismic wave simulations of Mars.

Starting this fall, a Mines graduate student will be partially funded by InSight to work full time on Mars simulations and observed data under the direction of Bozdag in collaboration with the InSight team. Bozdag joined the Mines Geophysics Department in 2017.

"What we'd like to do is run some high-resolution simulations globally and also focus on some specific craters and mountain areas to see the effect of the 3D structure on Martian waveforms," Bozdag said. "Our goal is not just estimating what kind of data we'll be getting from Mars. It's also to try to identify some real seismic signals from the real data."

The data should help scientists better understand not only Mars but also our own home here on Earth, she said.

"Mars is like an early version of the Earth," Bozdag said. "If we can understand what's currently happening on Mars, it will also help us understand the past of Earth and how our planet, together with our solar system, has been evolving over time."

The InSight Lander, which launched from California's Vandenberg Air Force Base on May 5, is set to arrive on Mars on Nov. 26. Day-to-day science activities will begin about 30 days into the mission. For more information about the InSight mission, go to mars.nasa.gov/insight.