The new Center for Mining Sustainability will address the environmental and societal concerns surrounding small-scale mining and promote the practice in a way that sustains the industry, supports local economies and minimizes environmental impacts. 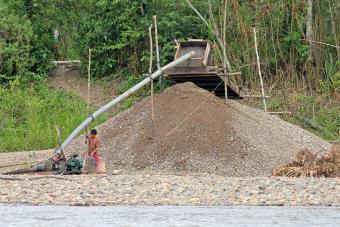 Illegal gold mining along the Madre de Dios River is often a dangerous practice that can have significant environmental and health risks.

In Peru, artisanal and small-scale mining is a way of life.

Miners extract valuable ore, such as gold, copper and zinc, from marginal deposits not deemed profitable to mine on a large scale, often using simple tools and rudimentary practices.

The work is difficult and dangerous. Miners frequently labor under conditions devoid of the most basic safety, health and environmental standards, and residents of surrounding communities experience a host of problems, from air and water pollution to geologic hazards, such as landslides.

In 2002, the Peruvian government began a concerted push to address these industry issues. And in 2018, researchers from the Universidad Nacional de San Agustín (UNSA) in Arequipa—the country’s second most industrialized city—decided to partner with another university to find viable solutions to the safety and environmental concerns that plague the industry. They turned to Mines, an institution recognized worldwide as a leader in mining and sustainability research.

Mines faculty recognized the natural fit for the interdisciplinary research approach they favor and appreciated the challenges that Peru faces—some of Colorado’s abandoned mines present engineers with legacy and reclamation challenges that bear a striking resemblance to many of Peru’s small-scale mining concerns.

The collaboration was finalized in July 2019 with the formal creation of the Center for Mining Sustainability. The center will address the environmental and societal concerns surrounding small-scale mining and promote the practice in a way that sustains the industry, supports local economies and minimizes environmental impacts.

Paul Santi, Mines professor of geology and geological engineering and the center’s director, is excited by the opportunities inherent to the new joint venture. “Mines’ technological focus on engineering and science and our great strengths in geology, water, mining and materials make us an obvious choice to undertake this initiative with UNSA,” he said.

Small-scale mining is a reality for many and a practice that’s not likely to disappear anytime soon, Santi said. “This is how people in many parts of the world make a living, so our job is to find ways to increase their safety and minimize the environmental and health impacts that mining creates.”

Formally speaking, said Santi, the center’s vision is to provide research-driven solutions for mining issues by building research capacity, training scientists and solving key mining, environmental and societal problems. But in his eyes, the partnership boils down to three main goals.

The first is the chance to make a meaningful, humanitarian contribution. “Our aim is to improve what’s going on in small-scale mining in terms of safety and efficiency, not only to make it a more viable lifestyle but also to improve the safety of the communities around mines by reducing contaminants in the air and water,” Santi said.

The second is to assist UNSA in developing a deeper research culture across the institution. “The university’s culture is historically that of a teaching institution, but they would like to increase their focus on research,” Santi explained. “This is much like the situation Mines found itself in 30 or 40 years ago—a teaching institution that was leaning more toward research—so I think we’re ideally suited to help UNSA achieve its goals.”

The third is to do good—and interesting—science. “This is an opportunity to do some cool things in a unique setting,” Santi said.

The partner ship has launched with intensity—nine projects running simultaneously—and is set to complete its current phase in November 2020. “We’re operating on a rather short fuse,” Santi conceded. “But the collaboration’s off to a great start and is running smoothly. We learned a lot from Purdue University’s existing agricultural partnership with UNSA, so we were able to hit the ground running.”

Among the projects currently underway is an investigation into a series of large landslides in the Arequipa region. “These landslides have the potential to do great damage—to the Pan-American Highway, to a milk plant and to communities in the area,” said Santi. “We’re running geophysical studies and doing groundwater modeling to figure out how water usage and irrigation practices are contributing to these events and formulate ways to prevent them in the future.”

Another project in the works involves the transformation of mining liabilities such as tailings—the dusty, mud-like waste that is left behind after the valuable portion of the ore is separated from the unusable portion—into benefits. Tailings are often toxic, and their storage and handling pose a huge problem for mining operations worldwide, said Reza Hedayat, a civil and environmental engineering assistant professor who is among the faculty addressing the issue. “We’re currently evaluating the properties of the tailings to see how they can be recycled and reused, perhaps as bricks or construction and road-based materials,” he said.

Tailings present a large potential detriment to the environment as they can contribute to air and groundwater pollution, Hedayat continued. “If we can engineer processes that will allow us to turn waste materials into materials of need, it would be incredibly valuable.”

It’s this kind of sustainability—another Mines strength—that plays a key role in every mining endeavor. “If we can become more adept at extracting valuable materials from the ore, as well as at reusing whatever byproducts are produced, we can reduce the overall environmental impact of artisanal mining, which is so important,” Hedayat said.

For Priscilla Nelson, developing knowledge that leads to something approximating zero waste is a laudable goal. And the only way to truly achieve sustainability, says the professor and former department head of mining engineering, is to be good stewards of Earth’s resources. “Materials are not being produced by geological processes at the rate we’re using them,” she pointed out, “so we have to be more thoughtful.”

Nelson is particularly excited about the tailings project. “Right now, tailings are being stockpiled in tailing dams, leaving us with a lot of materials for which we have no use,” she said. “Recycling these materials not only reduces the impact on the environment but also provides much-needed materials for other purposes.”

Looking to the future

The importance of mining to Peru’s economy—the industry comprises nearly 14 percent of the country’s GDP and approximately 60 percent of its exports—coupled with Mines’ expertise in mining engineering makes the partnership a natural one, Nelson said. And the benefits of the collaboration aren’t confined to UNSA and the Arequipa region. “We’re not just solving problems—we’re building a long-term relationship,” she observed. “And as we work toward a point where our two faculties know and trust each other, the center will become a resource for the world.”

Santi concurs. While the nine current projects have a regional focus that’s specific to Peru and fall within UNSA’s mission, he points out that the aim of the partnership is to generate solutions that can be applied to small-scale mining anywhere in the world.

“Ultimately, we want faculty from Mines and UNSA to be viewed as worldwide leaders in artisanal and small-scale mining research. We want people in Africa, Asia and developing countries to look to us for answers regarding the best sustainable small-scale mining practices,” he said.

Santi and his colleagues embrace the challenge. “The work we’re doing with UNSA is different from other initiatives in that it’s easy to see the importance and context of our research,” he said. “We’re working with communities to improve safety and quality of life. Through the center, we have the potential to have a much bigger impact on the world." 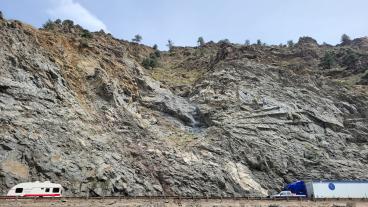