We spend 90 percent of our time indoors (according to the EPA) without realizing that the air we breathe could be potentially dangerous to our long-term health. Civil and Environmental Engineering professor Tissa Illangasekare has spent the last five years researching how volatile organic compounds, which are commonly entrapped as non-aqueous phase liquids (NAPLs) or dissolved into groundwater to produce plumes, affect our indoor air concentration.

“We drink so many liters of water a day, but we inhale so many thousands of liters of air,” Illangasekare said. (According to the EPA, the average American inhales close to 3,000 gallons a day.) “Sometimes we go to a contaminated site, test the water and we find it’s clean but later we go inside the building and find the vapor is contaminated.”

In 2009, Illangasekare and his research group, including a collaborator from the U.S. Air Force Academy, received funding from the Department of Defense Strategic Environmental Research and Development Program Office. The funding allowed the researchers to improve their understanding of the processes and mechanisms controlling vapor generation from entrapped NAPL sources and groundwater plumes, their subsequent migration through the subsurface, and their attenuation in naturally heterogeneous vadose zones under various natural physical, climatic, and geochemical conditions.

As the director of the Center for Experimental Study of Subsurface Environmental Processes, Illangasekare has an advantage. In his lab, he works with students to control experiments in multiscale test systems, studying vapor and airflow through unsaturated soils. The tanks are instrumented with soil moisture, relative humidity and temperature sensors. Using computation models, Illangasekare can predict how various climates affect soil concentrations expected to be found in a building.

Their hypothesis was that some of this variability could originate from weather and hydrologic cycle dynamics, such as surface heating, rainfall and water table fluctuation.

“We learned how contaminant vapors move preferentially through the ground and make their way into people’s basements or crawl spaces,” said Kathleen Smits, a professor in the Department of Civil and Environmental Engineering, who has worked with Illangasekare for the past five years. “We also discovered how this is influenced by changes in climate (e.g. temperature, wind conditions and precipitation).”

In April 2014, Illangasekare received the 2012 European Geosciences Union's Henry Darcy Medal for his scientific contributions in water resources research and water resources engineering and management. Two months later, he was one of the coauthors on a report to the Strategic Environmental Research and Development Program on “Vapor Intrusion From Entrapped NAPL Sources and Groundwater Plumes: Process Understanding and Improved Modeling Tools for Pathway Assessment.”

“Our research has contributed to fundamentally understanding what’s happening to this system, which will help decision makers and regulatory agencies give better guidelines on how to manage these sites,” he said.

“There’s a need for this science to exist. We are training a new generation of scientists and engineers to look at these kinds of problems.”

Research
Undergraduate
Water
Energy
Faculty
About Mines
Colorado School of Mines is a public research university focused on science and engineering, where students and faculty together address the great challenges society faces today - particularly those related to the Earth, energy and the environment. 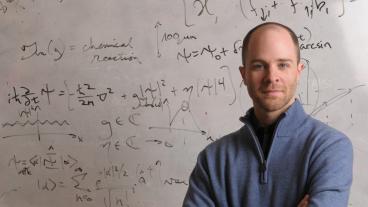