A mechanical engineering professor at Colorado School of Mines is part of a team of researchers working on better ways to detect concussions and more protective equipment to prevent them.

Called PANTHER, the group of scientists from academia, industry and federal was recently awarded a new $10 million grant from the U.S. Office of Naval Research backing their research.

“In our lab, we’re working on understanding and characterizing the ability of current and next-generation liner materials for military helmets to absorb energy to protect the brain against traumatic brain injury. So, for soldiers in the field TBI could be from something simple like falling when running or hitting their head when inside a vehicle on bumpy terrain, up to blasts by an IED,” Lamberson said. “How the materials inside the helmet behave depends on not only how they are loaded, but how fast - and so their performance can change dramatically under various extreme conditions seen on the battlefield.”

Lamberson and Research Assistant Professor Stylianos Koumlis are collaborating on the helmet liner work with industry partner Team Wendy, also a member of PANTHER. The company develops protective equipment and provides the liner materials from its Advanced Combat Helmet to Lamberson’s research group.

“Along with our collaborators, we’re measuring the liners’ protective performance and then using that information to figure out how to minimize loading transferred from the helmet to the skull and then the brain that could cause injury,” Lamberson said.

The new funding will allow PANTHER researchers to expand the scope of their work to include blast-induced concussions, a significant concern to the military.

The team is also pursuing a new approach to aid in the development of reliable blood or saliva tests for diagnosing concussions. During a concussion, brain cells release proteins as a stress response. By studying injured brain tissue, the researchers will work to identify specific proteins or other biomarkers that may be promising targets for future diagnostic tests.

In his own research, Franck is working to quantify the exact amount of mechanical stress and strain that it takes to damage brain cells enough to cause a concussion. He and his colleagues will use that cellular injury data to develop high-fidelity computational models of the human head and brain.

“Although this research effort is motivated by the U.S. Department of Defense’s goal of reducing traumatic brain injuries suffered by members of the military, the basic scientific advances that we make will also benefit the public broadly,” Franck said. “With PANTHER, we ultimately want to solve the brain injury problem in society as a whole.” 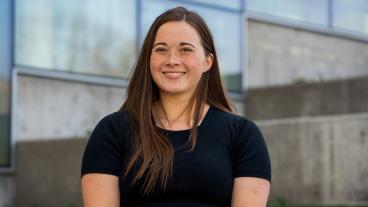 Christine Yee: "I chose Mines because of the positive reputation for shaping well-rounded engineers prepared for a long-term career."