A unique collaboration between a synthetic chemist and a nuclear physicist at Colorado School of Mines has been awarded $1.5 million over five years by the Department of Homeland Security to develop stable, inexpensive materials for detecting dangerous nuclear radiation—the kind that emanates from fissionable material or so-called “dirty bombs.”

The chemistry side of the project has been designing and synthesizing organic materials that can be formulated into plastic shapes for converting high-energy nuclear radiation into visible and ultraviolet light. These resulting scintillators—currently disc-shaped pieces that can fit in one’s palm—are then tested by the nuclear physicists who couple them to sensors that measure the amount of visible and ultraviolet photons generated and correlate that to the radiation absorbed.

While the technology itself is not new, “there’s no product out there that is good enough and stable enough to be widely deployed,” Greife said. “So what we are doing is a variation on previous approaches that have promise.”

The new project is complementary to previous work also funded by the DHS’ Domestic Nuclear Detection Office (DNDO), where the team worked on neutron-sensitive additives. In this latest work, they’ve moved on to being able to better detect and analyze Gamma radiation.

The cross-disciplinary partnership has provided the group more options in pursuit of its goals. While other researchers might have to buy the commercial dopants that make plastics emit light, “we are custom-designing those materials to be more efficient and stable,” Sellinger said. “That’s uncommon in this area of study.”

“We have been going to reporting meetings, seeing what other people are doing,” Greife said, “and we’ve been producing the widest variety of things to try out and work on.”

Efficiency is only part of the equation. “We always have to look at the price issue, because in order to get wide deployment you really have to be relatively inexpensive,” Greife said. That’s where the plastic comes in—it’s cheap, and it also has the advantage of being easy to form into various shapes. “You just have to put it into a mold,” Sellinger said. Of course, they must be able to blend their materials evenly into the polymer.

Sellinger and Greife expect to down-select to three or four materials with varying properties that have the most promise. “We would outsource the scale-up of these materials to a company with expertise in this area,” Sellinger said. “Basically, here’s the recipe, and can you make us a few kilograms.”

Synthesizing gram quantities of material is a big step for the chemists. For example in other projects with NREL, Sellinger is working at the milligram scale, processing films just nanometers thick. But eventually, these scintillators will be much larger—entire walls at the entrances to football stadiums or big enough to scan entire trucks and shipping containers.

Chemistry
Nuclear
Physics
About Mines
Colorado School of Mines is a public research university focused on science and engineering, where students and faculty together address the great challenges society faces today - particularly those related to the Earth, energy and the environment. 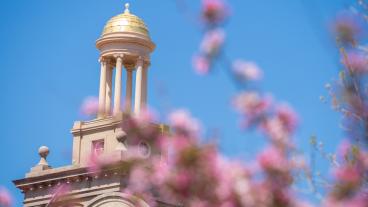