The newest float in Denver’s 9News Parade of Lights has a Colorado School of Mines connection.

Keep your ears perked or you might miss it.

“The world needs to know that Mines has a music technology program,” Klimek said. “A lot of students, one of the first things their parents ask is, ‘Our students are very interested in music and they’re interested in technology. What do you have?’ We’re constantly trying to make connections out there internationally, nationally and locally so people know the skill set and training programs are here.”

The annual holiday lights parade will begin its festive march through downtown Denver at 8 p.m. Friday, Dec. 1, and again at 6 p.m. Saturday, Dec. 2. Friday's parade will also be broadcast live on 9News KUSA-TV.

Composing a piece of original music for a parade float posed a unique set of challenges – so much so that Klimek and Cullison are planning to give a similar project to students in the Division of Humanities, Arts and Social Sciences’ Music, Engineering and Recording Arts Minor Program. The minor offers students experience on both sides of the recording-room glass – music performance and music recording.

“The float issue is a real issue – you get to view 15 seconds of this thing going by,” Cullison said. “We didn’t want people to stop listening and say, ‘Oh, it’s another float’ and return to their hot chocolate. It’s an absolutely gorgeous float. We want to do everything we can to draw the crowd into the passing float and make sure they’re getting the most impact out of it, a total audio and visual sensory experience.”

“The idea was at every second of the recording to have something happen, to have them go, ‘Oh, I want to listen to more,’ ” Klimek said. “If it’s the same thing over and over again, they stop listening and move on to the next display.”

The composition itself drew inspiration from the winter wind and a child’s sense of awe, Klimek said.

“When you hear the ‘Wind Carol,’ you hear the wind blowing. It rises up and falls back down,” he said. “The first time my grandson heard the wind, we were walking on the trail along Clear Creek and he just perked up and his eyes widened. It’s invisible but for him it was the coolest thing in the world.”

The Mines connection doesn’t end there, either. Golden’s Matsuo Engineering – owned by Allan Matsuo ’92 – consulted on the project, helping IECRM take its concept drawings through production and work with the acrylic fabricators, lighting companies and construction crews to forge the twinkling, color-changing float.

“It’s exciting to see it all come together,” said Matsuo, who plans to walk in Saturday’s parade. “Just like a building going up, it’s gratifying to see it come to fruition and know you were part of it.”

And don’t worry: If you miss this year’s parade, you’ll get another chance to experience the Sparkling Ice Castle and its Mines-made soundtrack next year.

“Our job in the HASS Music and Performing Arts building is to say, ‘Those walls where you think I’m a math person or I’m an art major, those walls are self-imposed.’ There’s no reason an art major can’t understand physics and love math. There’s no reason a math major can’t dig art,” Cullison said. “If we can help facilitate that cross-communication, we’re creating a better student, a Renaissance student of the present day.” 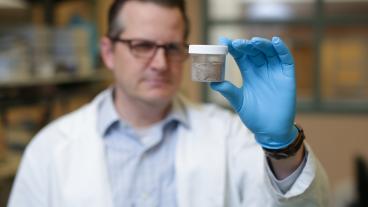