The Colorado School of Mines Hyperloop team is headed to Arizona for three days of integrative testing on a 150-foot open-air test track at Arizona State University's Polytechnic campus.

DiggerLoop qualified earlier this year for the 2018 SpaceX Hyperloop Pod Competition, the second year in a row that Mines will send a team to the international collegiate design competition. A total of 20 teams from around the world will face off in the main event in July at SpaceX's California headquarters.

DiggerLoop hopes that testing its futuristic transport pod ahead of the competition – something the previous team didn't have the opportunity to do – will boost their chances of making it to the final test track at SpaceX.

"There's a ton of safety checks once we get to SpaceX. For us to go to Arizona first, we can document all of our tests and send them to SpaceX and get some pre-approvals before we even get to California," said project manager Tyler Evans, who graduated this month with a bachelor's degree in mechanical engineering. "It will give us an even better chance to get onto the final track."

And while DiggerLoop ultimately hopes to hit speeds of 300 miles per hour at SpaceX, their pod will be traveling a bit slower in Arizona. Their goal is at least 25 mph, which is the maximum speed that SpaceX allows on the first of two tracks in the final competition, Evans said.

"It's a lot of tuning our system," said Christian Jensen, a senior in mechanical engineering and controls subsystem lead. "We're going to measure exactly what brake output we can get, exactly what kind of acceleration we can expect. That will help us model the pod in a larger track a lot better."

Once the team gets back from Arizona, they'll have about two months before the final competition to make any necessary adjustments and tweaks. The pod already looks dramatically different from last year's drag racer-inspired design. It's more compact, sleeker and shorter – the analogy that the team is using is they've transformed the pod from electric car to electric train.

"We built a whole new chassis from the ground up," said Ashley Haran, chassis and suspension lead and a senior in mechanical engineering.

"If we didn't start off where last year's team left off, though, we would not be where we are right now," said Trevor Bachman, braking/propulsion subsystem lead and a May graduate in mechanical engineering. "They gave us a great foundation to build from."

The students have also been working closely with a number of industry partners and faculty members this time around. Darren McSweeney, electronic and computing support manager at Mines, helped connect the team with National Instruments – DiggerLoop is using their industrial-grade rugged controller for the pod. Robert Kee, George R. Brown Distinguished Professor of Mechanical Engineering, also put the team in touch with K2 Energy, which is helping with the battery system, along with the National Renewable Energy Laboratory.

"K2 Energy's batteries are used on Blue Origin spacecraft, Jeff Bezos' equivalent to SpaceX," said Connor Banks, power subsystem lead and a senior in mechanical engineering. "It's been really cool to work with these high-tech companies."

Knowing that they're working on the cutting edge of transportation technology has been a great motivator, too, especially as they've encountered speed bumps along the way, Banks said.

"I kind of forget that it's something that hasn't been done before," Haran said. "You just keep chugging along." 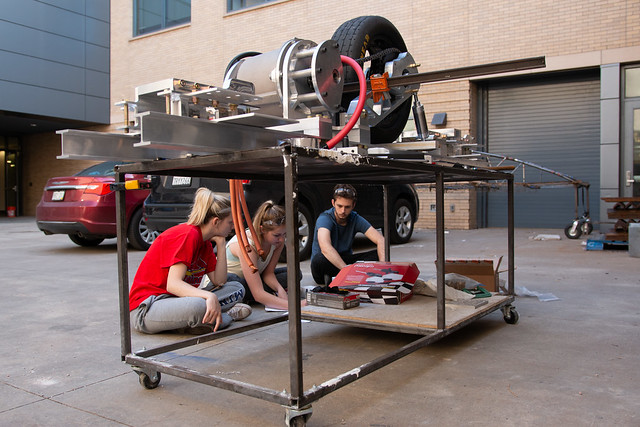 Capstone Design
Mechanical engineering
Students
Undergraduate
Student Activities
About Mines
Colorado School of Mines is a public research university focused on science and engineering, where students and faculty together address the great challenges society faces today - particularly those related to the Earth, energy and the environment.

“Electrical engineering is in almost every aspect of our lives now — it’s a lot more than just circuits and wiring.”