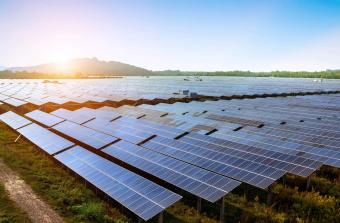 When the COVID-19 pandemic shut down in-person scientific meetings across the world earlier this year, the directors of the Mines-NREL Nexus partnership looked for an opportunity to still foster research collaborations.

Launched in 2019, the Nexus initiative aims to strengthen and expand collaboration between Colorado School of Mines and the U.S. Department of Energy’s National Renewable Energy Laboratory (NREL). There were plans to host a series of in-person workshops this year to foster new connections between researchers – but with COVID, that was not possible.

Instead of switching to virtual workshops, though, the Nexus team pivoted entirely to a new approach.

The result was a new seed grant program that was able to jump-start the development of eight cutting-edge and collaborative interdisciplinary research proposals between Mines faculty and NREL researchers.  Ideas ranged from deep reinforcement learning to carbon sequestration to quantum electronics. Seed funding awards ranged from $10,000 to $15,000 for each of the Mines and NREL research teams, with a requirement that there was one person from each institution on the proposals.

“It really worked out unbelievably,” said Ryan M. Richards, professor of chemistry and the Mines lead of Nexus. “The core of the existing relationship between Mines and NREL is materials science for renewable energy. Through this seed funding, we were able to create new connections from Applied Mathematics and Statistics, Petroleum Engineering, Civil Engineering. We’re really excited about expanding this partnership into new areas.”

“We decided to use the Nexus funding to directly support our researchers and faculty at a time when the lab and the university were shut down because of COVID-19,” said Ellen Morris, director of university partnerships at NREL and co-director of Nexus. “It was a unique opportunity to amplify the bandwidth of people who were working at home and able to allocate precious time to think about new research ideas and collaborations that would lead to new funding proposals.”

All but two of the teams have already submitted formal proposals to funding agencies to expand upon the ideas they generated this summer.

The eight projects that received seed grants through Nexus were:

The Nexus seed grant will allow us to couple disciplinary expertise from Mines with the unique capabilities of the Clean Energy Manufacturing Analysis Center at NREL, enabling us to respond to proposal opportunities that require both technical innovation and a sophisticated understanding of the techno-economic benefits. In particular, we plan to target advanced manufacturing solicitations from DOE and the National Science Foundation (NSF) related to metal sulfide production for use in next generation batteries, optoelectronics, and catalysts.

MODELING FRAMEWORK FOR OPTIMIZING NEXT GENERATION BUILDING ENVELOPES FOR GRID

The seed funding will allow Mines and NREL engineers to write an NSF proposal on future dynamic materials that will ultimately change the way buildings interact with the grid. It will combine materials and building science with optimization techniques that will guide new development of building materials and systems that will ultimately allow the building envelope to store and release thermal energy when needed, reducing the need for heating and cooling systems.  This will allow NREL/Mines engineers to combine efforts on this NSF proposal and develop the idea together as well as find ways to more effectively communicate potential savings and identify potential projects between NREL and Mines on this field.

Desalination of impaired water is energy intensive compared to treatment of fresh water; therefore, coupling renewable energy, and especially solar energy, with desalination is logical and desirable. Current conveyance of heat from solar collectors to desalination processes is complex and material- and cost-intensive. Our project focuses on developing simple, inexpensive, and thermally efficient methods to convey heat to thermal membrane desalination processes for treatment of highly concentrated brines. We will use the seed funding to help support graduate and undergraduate students in developing research in response to several calls for proposals from the Bureau of Reclamation (BOR), DOE and the U.S. Department of Defense (DOD).

Our project combines the strength of NREL in materials growth and characterization with the growing focus on quantum devices at Mines. The complementary strengths of our teams provide opportunities for growth in unexplored areas, both fundamental and applied.

As the cost of manufacturing silicon solar panels plummets and their efficiency rises, the field reliability of the panels becomes an increasingly important focus of research. This project proposal will bring together expertise at Mines and NREL in advanced characterization of silicon to understand the performance degradation mechanisms at the atomistic level. Our partnership will essentially introduce new characterization methods to understand performance degradation in silicon solar cells, and help develop mitigation strategies.

The Nexus seed grant will allow us to jump-start a new collaboration between Mines and NREL and adopt methods of risk assessment from oil and gas exploration to geothermal energy exploration to reduce reliance on non-renewable energy sources. We propose to develop a new method to assess probability of success of geothermal wells based on the geological data and subsurface models. This method will be used to help make decisions about the type of energy (fossil, geothermal, or others) appropriate for remote government facilities. We plan to respond to solicitations from DOD and DOE related to the exploration of geothermal energy.

This project brings together domain scientists and algorithm developers to tackle unique challenges posed by renewable energy applications, namely the dynamic control of complex stochastic systems by augmenting the latest techniques in artificial intelligence through the use of Bayesian methods. This new collaboration between NREL and Mines will leverage expertise from both institutions and foster increased capabilities to support the NREL and Mines mission space. The Mines/NREL Nexus Seed Grant will be invaluable to develop nascent ideas for coupling Bayesian methodologies to deep reinforcement learning for controlling renewable energy systems under uncertainty. We will develop and implement a new generation of data-driven decision-support suite of predictive algorithms for controlling systems under uncertainty, based on a novel hierarchical framework, with real-world testing and applications.

We believe this technology has the potential to simultaneously address multiple problems by strengthening concrete, sequestering carbon, and enhancing the life-cycle of carbonaceous waste. This project combines two of the biggest strengths in our institutions: materials science at Mines and renewable energy technologies at NREL. Although it looks small, we are sure this grant will greatly accelerate the development of a fantastic proposal to fund the development of a multi-year project with a large scope.