A rare study of the radioactive element berkelium, co-led by Mines Chemistry Assistant Professor Jenifer Braley, has been published in Science, one of the world’s top academic journals. 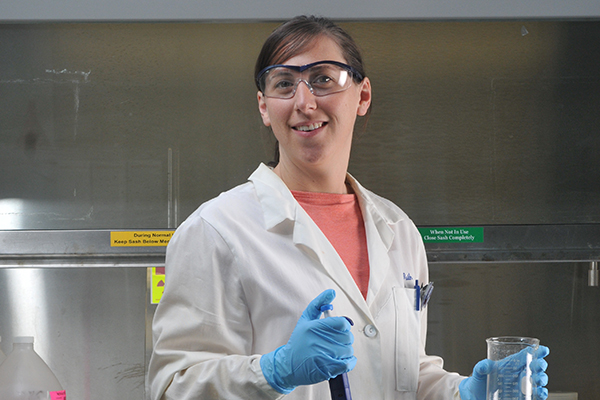 Braley, also a faculty member in the Nuclear Science and Engineering Program at Mines, and Thomas Albrecht-Schmitt of Florida State University led an international team of researchers. The article, “Characterization of berkelium(III) dipicolinate and borate compounds in solution and the solid state,” appears in the journal’s August 26 issue.

“Basically, the article addresses the chemistry of one of the heaviest and rarest elements on earth,” Braley said. “It’s not as explored as we thought it was.”

The availability of berkelium for research and its short half-life of 320 days have been the biggest factors in this knowledge gap. While elements with atomic numbers 1 (hydrogen) through 92 (uranium) can generally be found in nature, useful amounts of elements with higher numbers—transuranic elements—can only be created artificially.

“Since berkelium is frequently used for the discovery of new elements, its availability for chemical studies has been extremely limited over the past 30 years,” Braley said. For this study, the berkelium was created by Oak Ridge National Laboratory using its High Flux Isotope Reactor, a process that cost about $500,000 and resulted in 13 milligrams for Albrecht-Schmitt and half a microgram for Braley.

Braley said her main finding was that berkelium appears to be a transitional element, sharing similar properties with both heavier and lighter actinide elements. Actinides are the 15 metallic elements with atomic numbers from 89 to 103, with berkelium sitting just past the halfway point at 97.

“For the longest time, it was understood that the ‘basement’ of the periodic table basically behaved the same way,” Braley said. This study shows that the chemistry of the heaviest elements is more nuanced than previously believed. More recent, yet-to-be-published work from the group using californium, a heavier actinide isotope, supports these observations and their results will be presented in an upcoming article.

“We’re very much at the beginning of this, and there’s a lot of very rich, unexplored chemistry that builds support for further heavy-element research,” Braley said.

Braley’s research took place in the recently completed Radiochemistry Laboratory in the Mines General Research Laboratory. “It’s a beautiful facility,” she noted. The lab is licensed by the state as able to handle actinides as heavy as einsteinium, although the amount of material Braley received meant no extreme protective measures were necessary.

“Half a microgram is not big—you can’t even see it,” Braley said. “It’s in a vial as big as my thumb.” The berkelium was shipped by FedEx, in a “lead pig” about the size of a Nerf football.

“Just having the material was exciting,” Braley said. Access to these elements is obviously limited, and Braley said her body of work in the field—particularly receiving a Department of Energy Early Career Research Program award in 2014 to study the heaviest available actinides—led to her being approved for this research.

“For a couple of years it was just Tom (Albrecht-Schmitt) studying this chemistry by himself,” Braley said. “You want other people testing these hypotheses, and they saw how I could be an important complement to that work.”

Read the article in Science: Characterization of berkelium(III) dipicolinate and borate compounds in solution and the solid state
Chemical and Engineering News: Berkelium chemistry exposed

Chemistry
Nuclear
Research
About Mines
Colorado School of Mines is a public research university focused on science and engineering, where students and faculty together address the great challenges society faces today - particularly those related to the Earth, energy and the environment.