A member of the Mines faculty since 2006, Sava has led the department on an interim basis since July 2019 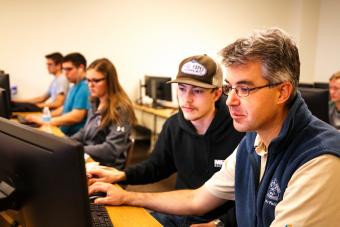 Paul Sava, professor and Green Chair of Exploration Geophysics, is the new head of the Geophysics Department at Colorado School of Mines.

Sava, who joined Mines in 2006, has led the department on an interim basis since July 2019, when John Bradford was named vice provost (now vice president) of global initiatives. Sava took on the permanent role effective April 1.

“Geophysics at Mines is undergoing rapid transformation – we’re expanding the scope of our work and that comes with changes not only to the curriculum and research portfolio, but also with new faculty of different backgrounds and scientific interests. It’s exciting work that will have long-term impact on Geophysics and on Mines as a whole,” Sava said. “I’m honored to have the opportunity to lead the department during this transformational time.”

A full professor since 2018, Sava holds a PhD and MS in geophysics from Stanford University, where he was a member of the Stanford Exploration Project. He has a bachelor’s degree, also in geophysics, from the University of Bucharest (Romania).

In 2007, the Society of Exploration Geophysicists (SEG) recognized him with the Reginald Fessenden Award for his work on wave-equation angle-domain imaging. A principal investigator in the Center for Wave Phenomena, Sava is also a member of the American Geophysical Union (AGU), American Astronomical Society (AAS), and the European Association of Geoscientists & Engineers (EAGE), where he served as a board member from 2012 to 2016 and as Chair of the Student Fund Board from 2015 to 2019.

Under his leadership, the Mines Geophysics Department will continue to look for opportunities to expand the breadth of its research into new areas, everything from construction monitoring to nondestructive materials testing to Arctic research to space resources, he said.

“The spectrum of applications for geophysics is quite broad,” Sava said. “I’m keen to explore opportunities that come from technology that wasn’t even available until recently.”

“The department has long had a close relationship with the extractive industry – minerals and oil and gas – and while other work occurred, that was the primary thrust of research in the department,” he said. “Moving forward, what I would like to see is the department continuing to do that vital work while also growing the scope of our research to address other challenges that have to do with understanding and monitoring the Earth – for example, looking at the interaction of the solid Earth and the atmosphere, and venturing into elements of climate and ocean monitoring. I am also keen to see us broaden our research to topics covering space exploration, resources and hazard mitigation. What we can do on Earth at one scale and in one context can be done elsewhere at other scales and other contexts, too.”