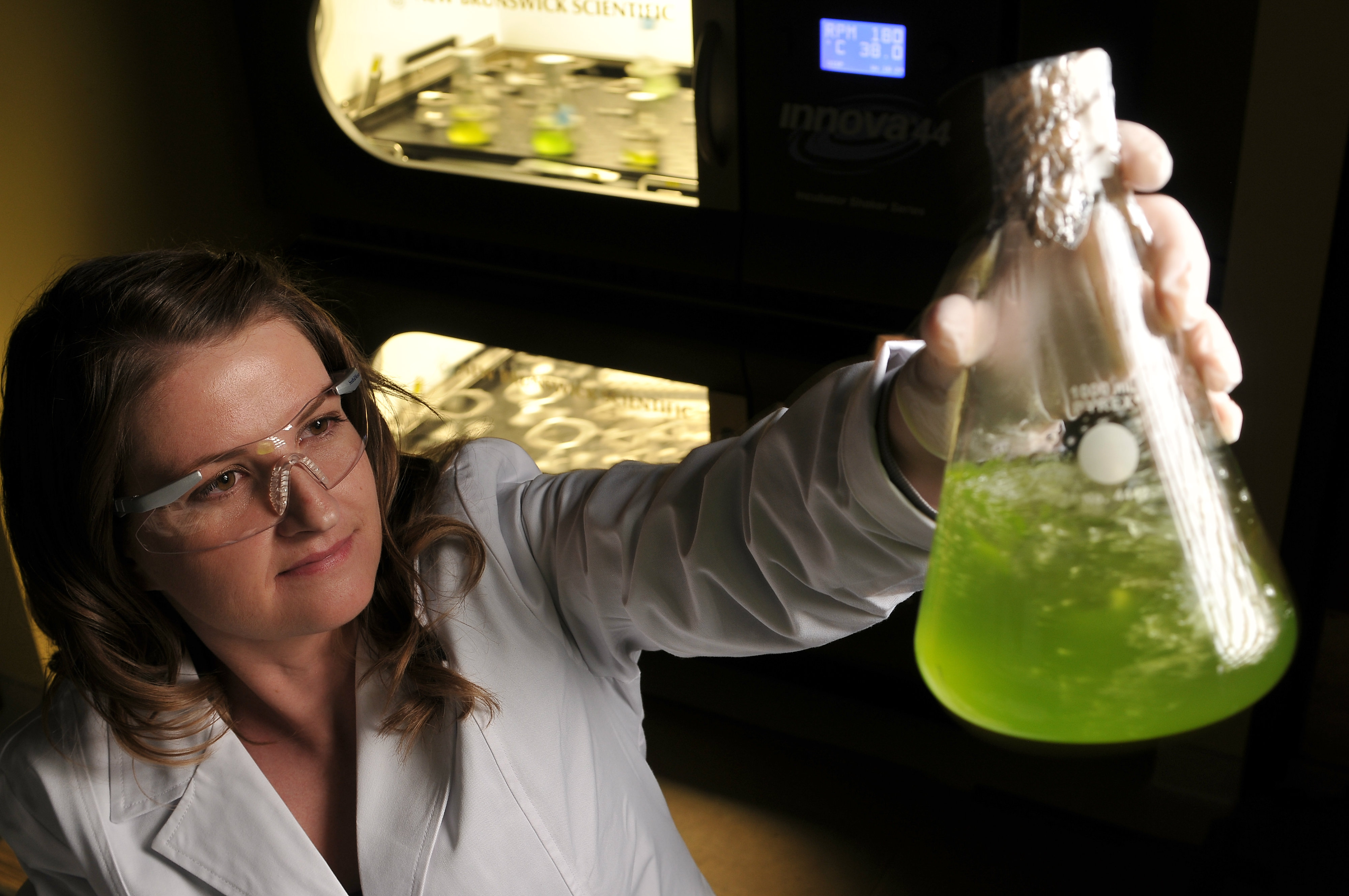 Nanette Boyle, assistant professor of chemical and biological engineering at Colorado School of Mines, has been awarded funding through the U.S. Department of Energy’s Early Career Research Program.

Boyle will receive $750,000 over five years to develop predictive metabolic models for algae – work that could help speed up the commercialization of strains that produce renewable biodiesel.

“Algae have been touted as the next big thing in biofuels research but they haven’t really reached their potential yet,” Boyle said. “They have a lot of advantages over crop plants in that they grow faster, they can be grown in brackish or wastewater and they have higher yields of the precursors for biodiesel. But part of the reason they haven’t reached that potential is we don’t have as advanced engineering tools as we do for the traditional model organisms like E. coli and yeast.”

Boyle was one of 84 scientists at universities and national laboratories across the U.S. chosen for the award, DOE’s Office of Science announced June 21. Two Mines faculty members – Boyle and Civil and Environmental Engineering Assistant Professor Reza Hedayat – received the honor, the second year in a row that the university has had multiple winners.

“Dr. Boyle’s Early Career award will provide valuable opportunities for training graduate students in integrating chemical engineering principles with biological systems,” said Carolyn Koh, professor and interim head of the Chemical and Biological Engineering Department. “Her work developing models of metabolism will have a significant impact on the field of metabolic engineering, especially for algae.”

Boyle’s research will focus on Chromochloris zofingiensis, which is valued for both its ability to accumulate a large amount of lipids, the precursor of biodiesel, as well as astaxanthin, a high-value antioxidant that is used as a nutraceutical.

The metabolic model for C. zofingiensis will be developed using a systems biology approach, in hopes of predicting ways to engineer around one of the biggest challenges in growing algae compared to other organisms: changes in light when grown outside.

“The most economical way to grow algae is outdoors, where they’re getting free CO2 and light, but this comes at a cost – the metabolism of the cells is constantly changing because of the day/night cycles,” Boyle said. “Typically, these cells store some kind of carbon – in this case, starch – during the day so they can use it at night. If we’re trying to engineer them to make biofuels, we want them to put as much as carbon as possible toward the biofuel and not starch.”

As part of the research, Boyle will also conduct large-scale outdoor tests at the DOE-funded algae test bed, AzCATI, at Arizona State University, where Boyle completed her undergraduate studies.

“We’re going to be tracking how biomass changes during the day at a much finer resolution than has ever been done before. We know starch accumulates during the day and gets used at night but other things are changing as well, like proteins, lipids and DNA,” Boyle said. “Along the way, we’re also going to be learning a lot more about cellular physiology. These day/night cycles are important for algae but also plants, humans and animals, as well. Circadian rhythms play a large role in our lives so it’s really important to understand the variations that occur from day to night.”

Boyle joined the Chemical and Biological Engineering Department at Mines in 2013. She received her PhD in chemical engineering from Purdue University and did postdoctoral research at University of Colorado and UCLA. Her work at Mines focuses on genome engineering approaches – synthetic biology, systems biology and metabolic engineering – to designing photosynthetic organisms capable of sustainably producing fuels, feedstocks and fine chemicals.

Now in its ninth year, the DOE Early Career Research Program provides support to scientific researchers during the important early years when many do their most formative work. To be eligible, researchers must have received their PhD within the last 10 years and be an untenured, tenure-track assistant or associate professor at a U.S. academic institution or a full-time employee at a DOE national laboratory.

Biosciences
Chemical & Biological Engineering
Faculty
Faculty awards
Research
About Mines
Colorado School of Mines is a public research university focused on science and engineering, where students and faculty together address the great challenges society faces today - particularly those related to the Earth, energy and the environment.