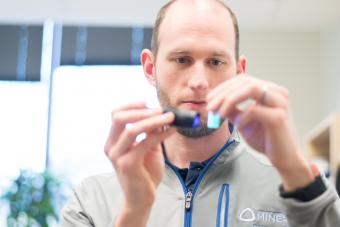 As medical care becomes more personalized, Mines researchers are forging ahead in the field by developing nano-sized biotechnology that was once the stuff of science fiction — which prompted one professor to bring up the 1966 movie Fantastic Voyage.

“It showed the actors being shrunken down to the size of a microbe and being injected into the body — fantastic plot, right? — and they’re going to break down this clot with a laser,” said David Marr, a professor of chemical and biological engineering whose research explores how nanoparticles can deliver targeted drug treatments in stroke and cystic fibrosis patients.

“I think a lot of the ideas I’ve had have been like, well, why can’t we do that?” he said. Though “personalized” or “precision” medicine usually refers to the recent rise in genetics-based cancer treatment, the overall trend toward more individualized medical treatments has expanded into tiny biosensors and nanobots that can travel to parts of the body that were previously inaccessible.

“A lot of the population-level solutions are already known,” said Kevin Cash, an assistant professor of chemical and biological engineering whose research in biosensors includes intradermal optical “nanoparticle tattoos” that can read important biological markers in patients. “So now we’re getting into, OK, for this patient, how can we make it better?”

Cash and Marr are both working with Children’s Hospital Colorado’s nationally renowned Mike McMorris Cystic Fibrosis Research and Care Center. Their projects are exploring whether it’s possible to use nanoparticles to break through the difficult-to-penetrate biofilm in the lungs of cystic fibrosis patients — Marr’s research is exploring drug delivery via inhalable bot-like nanoparticles, while Cash’s is focused on analysis for individualized drug treatment.

Marr’s idea for applying nanotechnology to cystic fibrosis treatment grew from his work on strokes. He’s the lead researcher on a $2.6 million National Institutes of Health grant to explore using nanoparticles that can be injected, magnetically formed into microwheels within a patient’s bloodstream, then rolled to a blockage for drug delivery. Keith Neeves, a former Mines researcher who is now a bioengineering professor at University of Colorado’s Anschutz Medical Campus, is his research partner on the grant. The pair won a second NIH grant to extend the same nanoparticle research into cystic fibrosis treatments.

“For strokes, it’s an occlusion in the brain,” Marr said. “The problem is, how do you get drugs to the site of this blockage and bust it up? It dawned on us that the sizeof these particles was ideal for inhalable therapy,” he said. “If the particles were too big, they would stay in your mouth. If they were too small, you could inhale them, but when you exhale, they would go right back out. So there’s a Goldilocks size. It turns out our particles are the right size.”

In addition to a dangerous buildup of mucus in the lungs, one of the challenges cystic fibrosis patients face is chronic drug-resistant respiratory infections. Of the inhaled nanoparticles, Marr said, “Imagine them acting as little wheels that will work their way through the mucus. For a lot of these biofilm diseases, the antibiotic just sits on the surface and can’t get through the biofilm. The idea is that these wheels will be able to dig through the mucus and deliver the antibiotic directly.”

Cash’s biosensor work, on the other hand, is designed to stay in one place — near the skin’s surface, where a patient or doctor can easily scan it, but just deep enough to give the sensors access to blood. It’s also meant to be unobtrusive and discreet.

“Our goal is to make it something you don’t really see and is just in the background constantly monitoring what’s going on,” Cash said. “We want it to look boring, because boring is good.”

The intradermal sensors are made of soft polymer beads that are about 100 nanometers in diameter. “We can put components inside the nanoparticles that can detect oxygen, glucose, sodium, potassium — all things that are important biologically,” he said. The optical or fluorescent sensors give a reading by emitting varying degrees of light.

Because the biosensors give real-time results, they’d be useful in a hospital, where clinicians can get readings quickly, but they’d also save a patient the time and expense of driving somewhere for a blood test. “The applications are pretty wide-reaching,” Cash said. “Almost any disease that you need to know what’s going on over time, this is a useful tool to have in your arsenal.”

However, for his cystic fibrosis research, Cash can use the nanosensors outside of the body, on biofilm samples from cystic fibrosis patients, to learn more about the biofilms themselves and whether the drug-resistant infection on the other side is treatable with a particular antibiotic.

Cash noted that while challenges like these — real-time, accessible testing — are something medical researchers have been trying to solve for decades, the students on his research team are well suited for the task. “We need smart engineers to go out, try solving these problems, fail, try again, fail, learn from these failures and build better systems,” he said. “That’s what Mines students are amazing at: ‘This is a big problem that no one knows how to address, and that’s what I want to do.’ "

(This story first appeared in the 2019-20 issue of Mines Research Magazine. Read this story and more in the interactive digital edition of the magazine.)