Take raw sewage flowing from a major apartment complex. Send it through a 2 millimeter screen. Let a flora of microorganisms feast on it for a while. Filter it – this time through pores just 50 billionths of a meter across. Don’t touch it with a single water-treatment chemical.

That’s what the above-ground sequence batch membrane bioreactor does, and the six gallons per minute flowing out are cleaner than the effluent from most wastewater treatment plants. And unlike the massive, in-ground infrastructure just downriver of our metropolitan areas, the bioreactor is portable. The fruits of Colorado School of Mines’ Advanced Water Technology Center’s (AQWATEC) signature project could form the nodes of a next-generation network of water-treatment facilities, able to reuse water locally for things like irrigation and toilet flushing, saving pumping energy and infrastructure costs, while reducing water demand.

In the control room, Tzahi Cath, a Mines professor and director of AQWATEC overseeing this facility, lifted the lid of a vat and dipped in a Pyrex measuring cup. It looked like… water. “That was sludge a few minutes ago,” he said. “There are technologies that can make good water from almost any source.”

The AQWATEC facility, just downhill from the apartments at Mines Park, is one of many water research efforts led by Mines faculty and students. Their studies of water begin with aquifers 1,000 feet down and continue through the turbulent interface of soil and the air above. Along the way, they use tools as diverse as a managed aquifer recharge site in Colorado’s eastern plains, a wooden wind tunnel built in a converted swimming pool, and the Jaguar supercomputer at Oak Ridge National Laboratory. They aim, collectively, to ensure safe, clean water for people and the environment.

It’s critically important work. A recent United Nations report described global water challenges ranging from water supply to sanitation infrastructure. More than 80 percent of the world’s wastewater goes untreated, according to the report. Furthermore, these challenges occur amid what the UN called “unprecedented” increases in food demand, rapid urbanization and climate change, and they aren’t limited to developing countries.

“Fresh water supplies are unlikely to keep up with global demand by 2040, increasing political instability, hobbling economic growth and endangering world food markets, according to a U.S. intelligence assessment,” Reuters reported in March 2012.

In the United States, the gap between budgets and needed upgrades to half-century-old water infrastructure is wide and growing, said Professor Jörg Drewes, a co-director of AQWATEC. “We need to come up with new ideas, to be innovative and work with the funding we have available,” Drewes said. “It’s not enough to merely replace what we have today.”

New solutions will require expertise across a broad swath of science and engineering, as well as legal, political and business realms. In 2011, Mines joined forces with Stanford University, the University of California at Berkeley, and New Mexico State University to create the first-ever NSF-funded Engineering Research Center devoted to water issues. It’s called Re-inventing the Nation’s Urban Water Infrastructure, or ReNUWIt.

Mines’ central role in ReNUWIt came in the wake of years of investment in labs and research infrastructure and the development of one of the country’s leading water-research programs, said Drewes, who is also ReNUWIt’s director of research. He is among a dozen Mines faculty involved in a 10-year effort to transform traditional models of water use to reduce consumption, recover and reuse water, cut energy use in water systems, and harness wastewater nutrients to improve urban habitats. Between the NSF and corporate partners, the program is expected to reap $80 million in research funding and enable an unprecedented degree of cross-institutional, multidisciplinary collaboration.

“The biggest benefits are really the collaboration and the long-term nature of the funding,” Drewes said. “We’re looking at how this might play out in 20 or 30 years, rather than how to help a certain utility with a particular research problem.”

The ReNUWIt projects at Mines are diverse. PhD student Ryan Holloway is working on tuning the AQWATEC bioreactor so its output varies by season. The idea is that, during the summer irrigation season, the system can be tuned so more organics and nutrients can exit for use in outdoor watering, cutting freshwater and also synthetic fertilizer use. This summer, they’ll be testing it on a half-acre plot outside the facility.

A few feet away, PhD student Dotti Ramey paints part of a microscope slide with red nail polish. Algae avoid nesting on that part, she explained. Bubbles rise through nine glass jugs backlit by squint-inducing grow lights. Hints of algae cling to bottlenecks. Outside, stainless-steel paddle wheels turn in what look like giant bathtubs. Rather than warm suds and yellow rubber duckies, the contents are cold and green. The work is part of a collaboration with startup and ReNUWIt partner BioVantage Resources, with the aim of understanding how wastewater could be used to nurture algae, which in turn treats the wastewater. The algae could be turned into useful lipids, biopolymers or even fuel.

Managed aquifer recharge is another Mines/ReNUWIt focus. This work is led by Professor Tissa Illangasekare and the Center for the Experimental Study of Subsurface Environmental Processes (CESEP). The idea is to apply concepts of rural managed aquifer recharge. This involves building ponds with very particular microbiological and subsurface features so clean water seeps back into aquifers rather than evaporating or flowing downstream to urban wastewater treatment systems. Pulling it off at a much smaller scale (think large swimming pools rather than football-field-sized ponds) demands expertise in chemistry, hydrology, biology and engineering, Drewes said.

ReNUWIt’s work extends past the physical into the managerial. Water managers keep tabs on a small number of big facilities. With an integrated network of AQWATEC-style plants enabling local reuse across a metropolitan area, managers will need tools to monitor it all and make smart adjustments. Mines Professor Reed Maxwell is working with UC Berkeley resource economist David Sunding to develop hydrologic and economic models to help quantify the costs and benefits and, ultimately, manage much more complex water infrastructures. 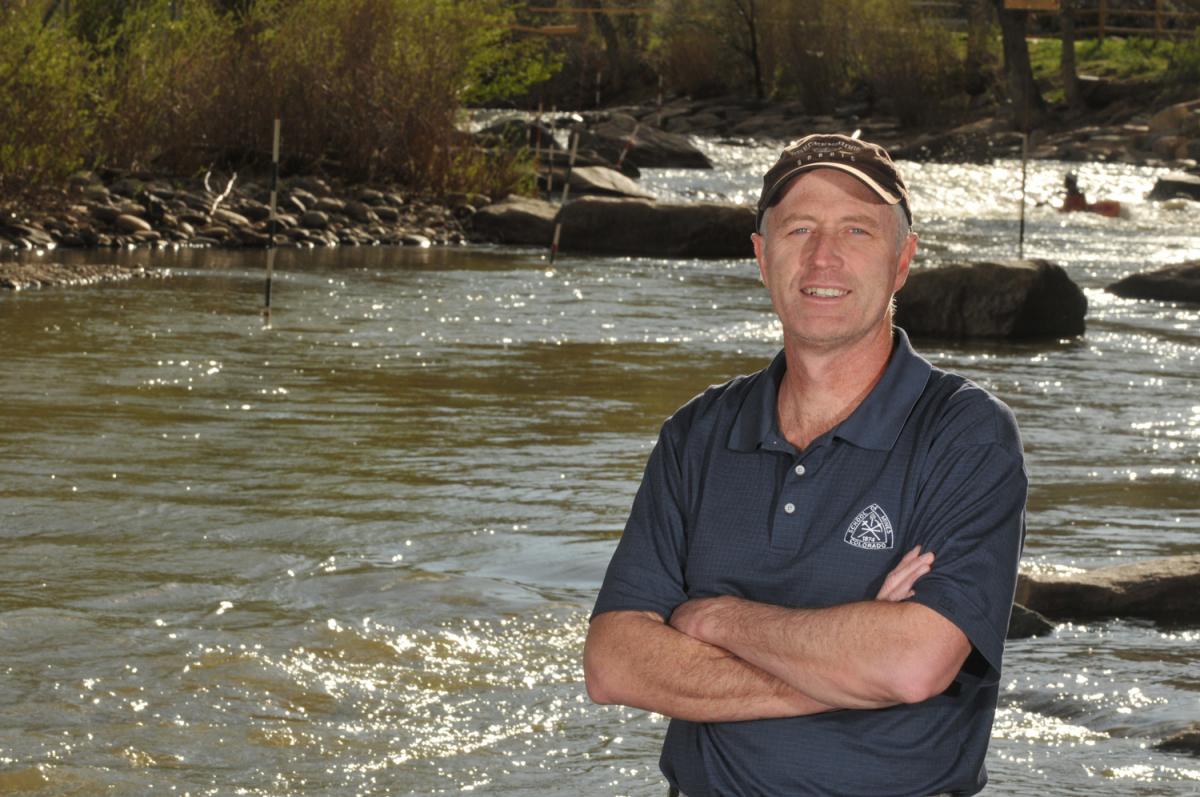 “It’s all about finding new ways to use and reuse water. That’s more than just science and engineering because you have to convince the politicians and the water managers, who are very conservative, to take a chance and do something in a different way,” said John McCray, a ReNUWIt investigator and director of Mines’ Department of Civil and Environmental Engineering.

Collaboration is woven into ReNUWIt’s fabric. Mines’ expertise in geology, hydrology, biology, engineering and numerical modeling is now connected with Stanford Law School’s legal and policy expertise and UC Berkeley’s economic savvy, Drewes said. The extended team has the breadth to handle the full spectrum of issues that crop up in attempts to reinvent something as fundamental as water infrastructure. Such cooperation might involve, for example, figuring out the best microbial mix to purify water captured after a storm, designing a system to enable it, and ensuring that the solution obeys water-rights law and economic logic, thereby saving money – and water – in the long run. How ingrained is ReNUWIt’s collaborative culture? PhD students in the program must have a core advisor at one of the other universities, Drewes explained.

Smits and her team are interested in the interaction of soil moisture and the atmosphere, which remains poorly understood. The wind tunnel lets them adjust the air speed above the soil surface as well as temperature and humidity. The heart of the system is a Plexiglas soil tank sandwich 24 feet long, four inches wide and four feet deep. An array of sensors penetrates and surrounds it, including an anemometer system the Mines undergraduate robotics club built. Researchers fill the translucent tank with soil, enabling the precise assessment of basic physical processes at a scale larger than lab bench, but more wieldy than a field site. They then build real-world observations into numerical models.

One of her research goals is to help climate modelers sharpen their software’s accuracy in modeling evaporation rate. She’s found, for example, there is a big evaporative difference between a 1 mph wind and a 2 mph wind. But higher winds than that seem to have less of an impact, Smits said.

Another application of her work is to increase the ability to accurately detect landmines. The loose soil covering mines and the presence of the mine itself create different thermal and hydraulic properties in the area around the mine, as opposed to a location away from a mine, she explained. “One of the reasons I became an environmental engineer is that I love helping people and helping the environment,” Smits said. “With land mines, we can see the potential positive impact we can make by understanding the science.”

Given the interest of carbon capture and sequestration – pumping carbon dioxide from power plants into formations thousands of feet down – it’s a hot topic. Carbonated water isn’t the problem (that’s what Perrier is, after all). But greater acidity from leaking carbon dioxide could speed up chemical reactions that release lead, uranium and other metals from aquifer rock.

In the lab, PhD student Assaf Wunsch bubbles CO2 through half-liter acrylic cylinders. By determining the mineral content of 23 elements in both the water and the rocks, they can see how different types of aquifers may react to carbon leakage. In related work, Navarre-Sitchler is working on models – run on the Jaguar supercomputer at Oak Ridge National Laboratory – investigating the migration of metals in aquifer.

Like so much of the water-related work happening at Mines, it’s science with big implications. As Navarre-Sitchler points out, “You can’t accurately understand the risks without understanding the issues.”

Faculty
Research
Water
About Mines
Colorado School of Mines is a public research university focused on science and engineering, where students and faculty together address the great challenges society faces today - particularly those related to the Earth, energy and the environment.