Aaen holds a PhD in electrical engineering from Arizona State University and MS and BS from the University of Toronto. He is a senior member of IEEE. 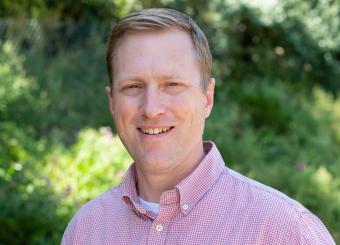 Peter Aaen is the new head of the Electrical Engineering Department at Colorado School of Mines.

He joins Mines from the University of Surrey (UK), where he served as a reader – the British equivalent to full professor – in microwave semiconductor device modeling since 2013. In 2016, he was also appointed as director of the South of England branch of the National Physical Laboratory, the U.K.’s national measurement standards lab.

Aaen holds a PhD in electrical engineering from Arizona State University and MS and BS from the University of Toronto. He is a senior member of IEEE.

Here are four more things to know about Aaen, his research and why he decided to become an Oredigger:

Aaen spent 16 years in industry before taking his first job in academia.

“I didn’t set out to be an academic. After my PhD, I worked at Motorola and lived in Phoenix for a long time, from 1997 to 2013, 16 years. Then I had an opportunity to transition to academia. I moved my family across the ocean and I was an academic in the U.K. I spent the last six years working at the University of Surrey and in addition to my academic role, I was director of the National Physical Laboratory for her southern part of the country, which is similar to NIST here.”

He originally wanted to be an astronaut.

“I wanted to be an aerospace engineer, but I fell in love with Maxwell’s equations [the basis for classical electromagnetism]. Ever since that first year, I really focused and started loving electrical engineering. There’s a lot of beauty in it. I really like when you’re able to take something from theory or simulation and match it with the real world and you see something for the first time that no one else has seen. I call those ‘champagne moments’ and I think you’re lucky if you have a few of those in your career.”

“I’ve been focusing on making devices more efficient. This is for RF/microwave parts, the parts in your cell phone or base stations. We’re at 4G now in our phones and the world is beginning to transition 5G and beyond – I’m not making 5G. I am trying to make the parts in 5G more efficient, mostly power amplifiers and transistors.”

He thinks Mines is a “real gem.”

“The department is a great size – 15-20 professors – and all the academics are incredibly bright. I felt, as a department head, this could be somewhere that I could make a real difference. Couple that with being able to live in Colorado, with all the natural beauty around us, it’s just a great job in a great place to live. It was not a difficult sell to the family. I’m really enjoying meeting everybody and finding out more about that they’re doing. Further developing the research and teaching programs that our unit offers is going to be really rewarding.”

Time travel – forward or backward? Watch below for a lightning round with Peter Aaen: 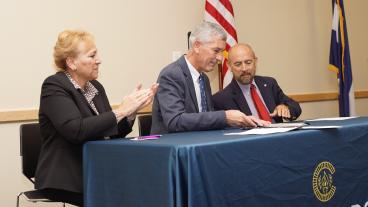 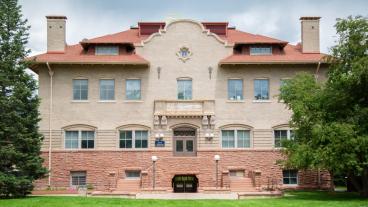 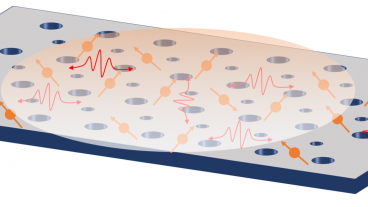