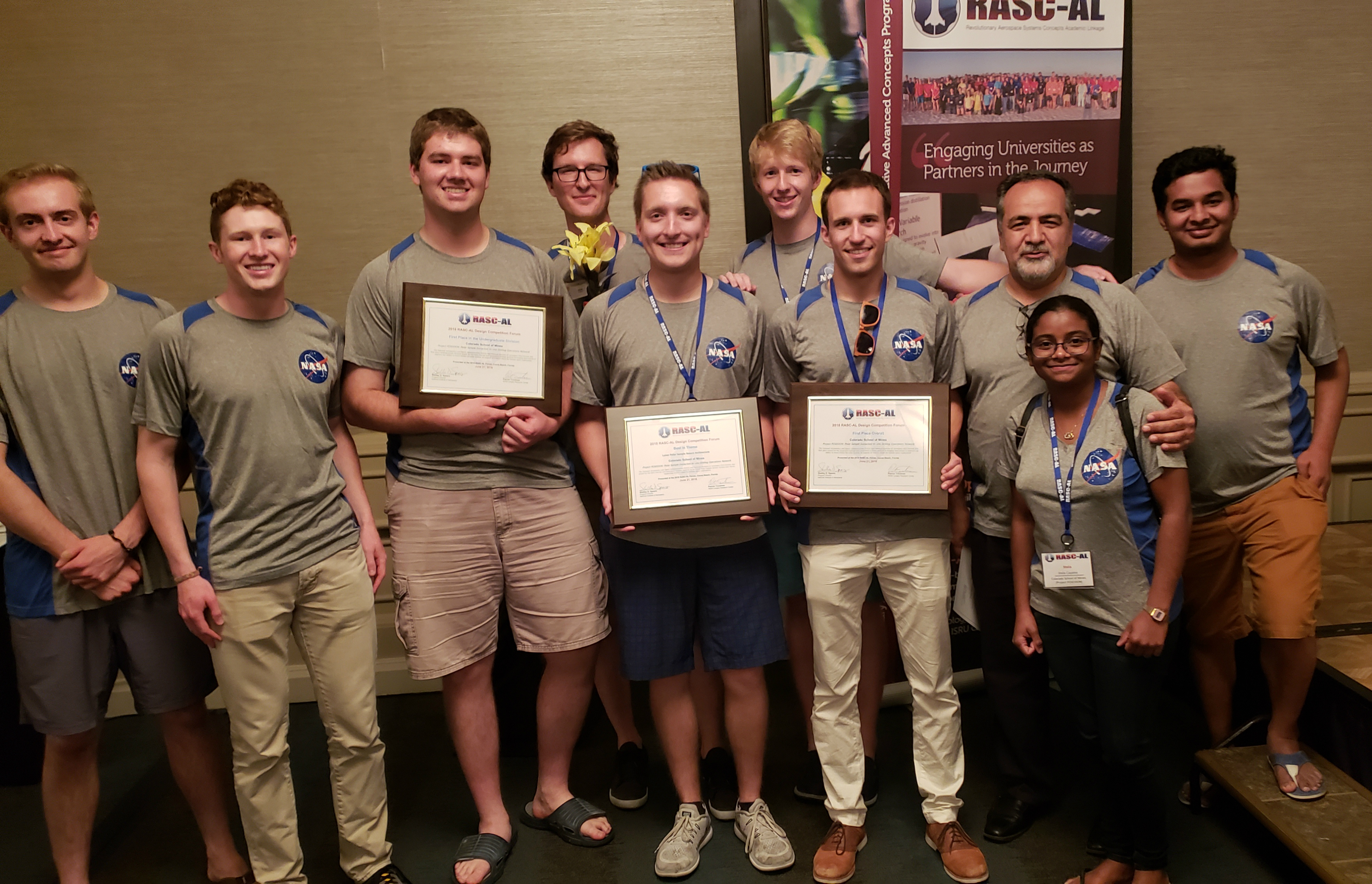 A team of Colorado School of Mines students won the grand prize at NASA's collegiate deep space competition, beating out 13 other undergraduate and graduate student teams from around the U.S. and the world.

Runner up in the competition was the University of Maryland TERPS: Trans-Mars Exploration Reusable Propulsion Stage. The top two teams won a travel stipend to present their research at the 2018 American Institute of Aeronautics and Astronautics (AIAA) Space and Astronautics Forum and Exposition (SPACE Forum) in Orlando, Florida, on Sept. 17.

"This is a win for Mines and a win for space resources," said team leader Adam Marcinkowski, a junior majoring in mechanical engineering. "We were going against teams that were dealing with rocketry or orbital mechanics or space habitats – traditional aerospace areas. For a space resources-focused team to win the entire competition affirms the importance of space resources in the future of human exploration of the solar system."

"Space is more than just rockets," he said.

POSEIDON, building on Mines' 20-plus-year history in space resources, selected lunar polar sample return architecture. Their mission's rovers would target the permanently shadowed regions of the moon, where scientists believe there could be as much as 1 billion metric tons of water ice. More specifically, the team chose the Cabeus crater, where a past mission crashed a rocket stage and detected water and hydrates in the resulting plume. That water could be used to make rocket propellant to fuel deep space missions to Mars and beyond.

Marcinkowski credited the visual aspect of their presentation for setting them apart from the rest of the competition. Teammate Ben Burckel built 3D animations using Blender, a free and open-source 3D creation suite he has been dabbling in for years.

"The Mines students working on the lunar ice core retrieval challenge showed the value of a strong science/engineering background, innovative and out-of-box thinking, progressive planning, being up-to-date with available technology and computer skills in solving very complex and critical problems. They combined these skills with their hard work, good coordination and teamwork, individual commitment to delivering on the work they were assigned to do," Rostami said. "The amazing outcomes were beyond what we had expected, and I commend the team for the achievement."

A second Mines-affiliated team, PORG Station (Planetary Orbiter: a Rotational Gravity Station), competed in the artificial gravity category. Michael Szostak, a senior majoring in mechanical engineering, led the PORG team, which was made up of former NASA Langley interns whom he recruited to take part in the competition.

"After many years of participating in the NASA RASC-AL competition, it was very exciting to see our team establish itself as the clear winner in not just one, but several categories," said Angel Abbud-Madrid, director of the Center for Space Resources at Mines. "This multidisciplinary student group presented an extremely well-articulated and complete plan to robotically access soil and ice samples from the lunar poles. This first-prize award goes to show that in both research and academic programs, Mines is undoubtedly a world leader in the space resources field."

Space
Space & Space Resources
Student awards
Students
Undergraduate
Student Activities
About Mines
Colorado School of Mines is a public research university focused on science and engineering, where students and faculty together address the great challenges society faces today - particularly those related to the Earth, energy and the environment.