Team hopes to find out more about how the structures move and react without gravity. 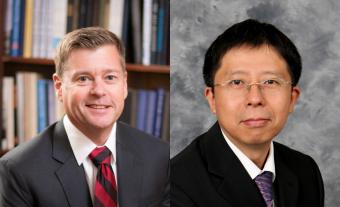 An experiment investigating the dynamics of colloidal chain systems, from a team at Colorado School of Mines, blasted off this summer to spend some time at the International Space Station.

Launched in August from Wallops Flight Facility in Virginia, the colloidal chain experiment was in space for three weeks. Mines postdoctoral student Ramona Mhanna spent the duration of the experiment at NASA’s Glenn Research Center in Cleveland, monitoring the samples and leading the data collection aspect of the experiment with NASA partners. Supporting her back at Mines were graduate student Yan Gao and undergraduate students Isaac van Tol and Ela Springer.

The experiment focused on how colloidal chains, which can act as larger-scale mimics of polymers or DNA, behave. Analyzing their behavior on Earth is difficult, because the ones the Mines group is interested in are heavy and sink in water. Launching the chains into space, without gravity present, is a great way to do that, said David Marr, professor of chemical and biological engineering. Marr, along with Ning Wu, associate professor of chemical and biological engineering, lead the experiment.

Colloidal chains are a type of colloidal molecule, basically bigger analogs of real molecules, that are small but still large enough to see and be manipulated. Marr said his team is interested not just in understanding how colloidal molecules behave in general, but how to use external fields, such as magnetic or electric fields, to turn the molecules on and off. Marr has worked with “microbots” in biomedical application before, assembling them from colloidal particles and allowing them to move through the body.

“In related ground-based studies, these chains move around like snakes or inchworms,” Marr said. “We’re looking at how they swim around in water and aqueous suspensions to mimic how they’d move in biomedical applications.”

There are many biomedical possibilities for application, Marr said. How can similar structures aerosolize for lung-based diseases? What are the possibilities for circulatory clogs? If the team can better understand how colloidal molecules move along a surface, just like they would in a body, we can better understand the range of potential, Marr said.

The colloidal chain samples were observed aboard the International Space Station with an instrument called the Light Microscopy Module (LMM). The LMM captured images and video of the samples, recording them moving in the gravity-free environment.

This is the second time the group has sent this kind of an experiment to space. The first was sent in 2019, on a SpaceX rocket. The samples from that experiment were improved, and then sent with the August launch this year.