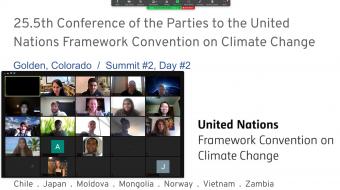 The Mines Global Studies Environment class holds its own virtual version of the Conference of the Parties to the United Nations Framework Convention on Climate Change.

The coronavirus pandemic prevented the world from holding its annual meeting to continue moving the Paris Agreement forward this fall, but Mines students pressed ahead in their place.

In an end-of-semester climate summit simulation in a Global Studies course taught by Humanities, Arts and Social Sciences Assistant Professor Adrianne Kroepsch, students held their own version of the annual meeting known as the Conference of the Parties to the United Nations Framework Convention on Climate Change, or COPs.

The formal 26th global COPs meeting has been pushed back a year to November 2021 in Glasgow, U.K. But in Global Studies Environment—a 200-level core course in HASS with 80 students in remote mode—an experiment in Zoom diplomacy went forward despite the international hiatus.

This year’s simulation was especially interesting because the 197 countries that are party to the Paris Agreement are due to update the initial greenhouse gas mitigation pledges they made when the deal was signed in 2015. Such updates are scheduled to occur every five years, starting in 2020. Since 2015, it has become clear that, while countries’ initial commitments were a crucial step forward in mitigating climate change, they will not be enough to keep global warming under the 1.5- to 2-degree Celsius threshold set by world leaders.

“The big question hovering over our 2020 summit is whether countries are stepping up to the plate and making their greenhouse gas mitigation plans more ambitious, and why or why not,” Kroepsch said. The answer thus far? “The students have ascertained that all the countries in our sample have upped their commitments except for Japan, which is holding theirs steady. But it’s important to remember that we have been working in real time and therefore we have a very incomplete set of national commitments thus far,” Kroepsch said.

The Mines summit was made up of the 17 countries that have turned in their 2020 plans early, which range from Rwanda to Switzerland. The remaining 180 plans are expected to arrive at the UN closer to the actual deadline of Dec. 31. In keeping with Global Studies learning goals, students are randomly assigned to represent countries other than the United States in order to develop an understanding of what climate governance look like from a different national perspective.

Kroepsch said the simulated summit is especially valuable for applied science and engineering students because it requires them to see that addressing climate change “is not actually one single gigantic problem, but myriad smaller problems that differ by country.”

For example, student representatives from New Zealand found that controlling agricultural emissions of biogenic methane is at the forefront of their efforts, while representatives from Singapore discovered that limited land area for renewable energy development meant that they are focusing primarily on public transportation efficiencies to achieve their decarbonization goals. Furthermore, students representing countries such as Jamaica and Kyrgyzstan found climate change adaptation goals to be paramount for their populations, given vulnerabilities to disasters and droughts.

“While all of that complexity can be overwhelming, there is actually some good news hidden inside of it,” Kroepsch said. “Because there are many different kinds of challenges, there are also many different kinds of solutions available, and lots of them are already being pursued.” Seeing this, and from an unfamiliar national perspective, helps students to see the many possible areas for cooperation and compromise among countries—from emissions trading to supporting green development.

“We wrap up the summit with a TED Talk about practicing ‘stubborn optimism’ on climate governance by Christiana Figueres, a Costa Rican diplomat and former executive director of the United Nations Framework Convention on Climate Change. By then, students have found quite a lot to be hopeful about,” Kroepsch said.

The exercise also cuts global climate governance down to size. “Global climate governance can feel so big that it’s hard to know where to start learning about it,” Kroepsch said. “Sitting in the shoes of an international diplomat helps students navigate the moving parts of the global institutional framework that has been developed in response to climate change and to engage in the process as it exists right now, in fall 2020.”

It doesn’t hurt that the Zoom summit is also geared toward reviewing central concepts from the course in anticipation of the final exam. What was this year’s take-home essay question?  Students tackled a very real pedagogical problem. Because global climate governance is constantly evolving, it is impossible to keep course texts up-to-date, so students are being charged with writing an update to their textbook, which was published a year before the Paris Agreement was signed.  It will be students’ job to bring the climate governance chapter up to speed for 2020, drawing from their climate simulation experience.

“There’s nothing like saying, ‘Hey, you are ahead of all the relevant textbooks on this subject’ to drive home that students are literally co-authors of the future,” Kroepsch said.