A Colorado School of Mines graduate student will get to pitch his space startup at a major international conference for satellite and aerospace professionals this spring – his team’s prize for winning the Techstars Startup Weekend in Boulder last month.

James Kiousis, a master’s student in the Engineering and Technology Management program, was the leader of Gold Orbit, the top-scoring team in the 52-hour startup competition, Techstar’s first ever to have a space theme. The team proposed a solution to a major challenge facing the satellite industry – the old satellites and other junk taking up valuable real estate in the Earth’s orbit.

“Over 70 percent of satellites up in orbit right now are defunct satellites that are taking up space that could actually be used by functioning satellites,” Kiousis said. “Each new satellite could generate $1.7 billion in revenue over its lifetime.”

Gold Orbit’s space debris cleanup module would deploy cables armed with electromagnets to ensnare defunct satellites and remove them from orbit – an approach that could also help future satellite operators comply with new end-of-life standards in the industry.

“Companies that send satellites up into orbit are required to have an end-of-life plan now – they have to spend more money on fuel, more money on maintenance, and get it to deorbit on its own or fly into an orbit that's not valuable,” Kiousis said. “We’re proposing a way that they don’t have to worry about an end-of-life program.”

Kiousis and his teammates – a group of current students and recent graduates from University of Denver, University of Colorado, South Dakota School of Mines & Technology, Loyola Marymount University and University of British Columbia – actually pivoted to their winning idea over the course of the weekend competition.

On the first night, participants pitched ideas and voted on the most interesting ones. Then it was up to them to form teams with diverse skill sets, and not necessarily the friends they arrived with.

Kiousis had proposed an asteroid mining company and a multi-university team coalesced around the idea. But as they got to work validating the concept and creating a prototype of their minimum viable product, they decided together to pivot to space debris cleanup.

As part of the process, they reached out to industry leaders to get feedback. An email from the CEO of Iridium, a major satellite communications company, helped confirm they were on the right path, Kiousis said.

“We ended up pitching the idea in front of the judges and they loved the idea. They loved the team. We ended up winning. It was such an awesome experience,” he said. “I went in just thinking I would have fun and meet some cool people. Now we’re going to be sent out to a conference in D.C.”

The SATELLITE 2019 Conference, set for May 6-9 in Washington, D.C., welcomes 15,000 satellite and aerospace professionals every year.

“James is a perfect example of a growing number of highly motivated Mines students taking advantage of not only the strong traditional engineering education at Mines but also the diverse and rapidly increasing aerospace-related academic, research and extracurricular activities on campus,” said Angel Abbud-Madrid, director of the Center for Space Resources at Mines. “He took classes on space exploration, space and planetary design and astronomy, became involved as officer in the Mines AIAA student chapter, participated in a NASA lunar mining design competition and is now complementing his undergraduate education with a master’s degree in engineering and technology management – the ideal background to impress all three space entrepreneurs judging his novel space business concept in a startup competition.”

Between now and May, Kiousis, who graduated in May with a bachelor’s degree in engineering physics, hopes to continue work on the startup part-time to get more customer validation and find the right people to design the actual module.

“I’ve always been interested in space,” Kiousis said. “My sophomore year, I took the Intro to Space Exploration class and my goal was to start an asteroid mining company. Which is funny, because even though we pivoted to space debris cleanup, this still could be applied to asteroid mining in the future."

Economics and business
Graduate
Space
Space & Space Resources
Students
Alumni
Student Activities
About Mines
Colorado School of Mines is a public research university focused on science and engineering, where students and faculty together address the great challenges society faces today - particularly those related to the Earth, energy and the environment. 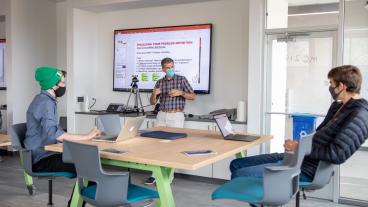