From lithium for batteries to neodymium for wind turbines, mined materials remain essential to modern life

Colorado School of Mines researchers are tackling the question of how to meet demand for critical materials from many angles, from policy to production 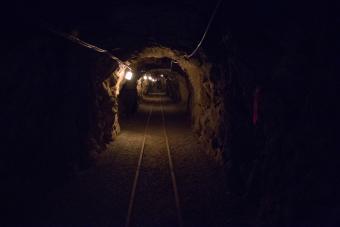 Job losses in coal mining have captured headlines for decades as the U.S. demand for energy shifted to renewables and natural gas. But while coal’s decline captured public and political attention, the global mining industry has already begun meeting new energy demands, undergoing a paradigm shift that will keep it evolving—and growing more relevant than ever—in the 2020s.

From copper for wiring to gold for smartphones to concrete for construction, mined materials are essential in modern life. “With our population growth, even if we became incredibly efficient, the demand would probably still exist for most materials we’re mining,” said Priscilla Nelson, professor of mining engineering.

And as the energy market shifts away from coal and toward renewables even more, the global demand for earth resources is only expected to grow.

“The energy landscape globally is changing dramatically,” said Morgan Bazilian, director of the Payne Institute for Public Policy. “It appears almost certain that there’s going to be significantly more technologies like batteries, electric vehicles, photovoltaics, and wind turbines deployed. All of those are mineral intensive. Thus, the future energy system will be more mineral intensive than the past.”

“And the mining industry is starting to understand and be supportive of the clean energy transition because they’ll play a fundamental role in it.”

Renewables, which accounted for 17 percent of energy generation in the U.S. in 2018, come with a heavy demand for metals.

Large amounts of aluminum and copper go into wind turbines. Storing the energy generated by wind and solar requires materials the U.S. has deemed critical to economic and national security, such as lithium and cobalt. The high-efficiency motors that wind turbines and electric cars use require rare earth elements such as dysprosium and neodymium for permanent magnets. The federal government considers rare earths so critical to national security that the U.S. Army is now funding commercial-scale rare earths processing facilities. Another rare metal, tellurium, is used in a film in photovoltaic solar cells to make them more efficient – the U.S. Geologic Survey calls it one of the least-common elements on the planet.

Mines researchers are tackling the question of how to meet that demand for critical materials from many angles, from policy to production.

“There will certainly be increased demand for these materials, and the question is, how well positioned is the world economy to satisfy this increased demand?” said Rod Eggert, Viola Vestal Coulter chair in mineral economics and deputy director of the U.S. Department of Energy’s Critical Materials Institute.

Mining more could help meet the demand, but recycling and reducing waste in mining processes will help as well. For example, researchers in the Metallurgical and Materials Engineering and Mining Engineering departments are working on ways to separate rare earths from other materials more efficiently. “There are 15 or so rare earth elements that tend to be found together in nature, and historically, that separation has been really inefficient,” Eggert said. “So there’s room for dramatic improvement.”

The mining industry will need to make other improvements in extraction and exploration as well, and a project at Mines that won National Science Foundation funding last year promises to bring more efficiency to both through artificial intelligence and data analytics.

"In comparison to oil and gas, the geology of metal deposits is very complicated and metal deposits that can be mined economically are difficult to find,” said Thomas Monecke, associate professor of geology and geological engineering.

Monecke is the site director for the Center for Advanced Subsurface Earth Resource Models, a research collaboration between Mines and Virginia Tech that brings geologists and mathematicians together to work on subsurface modeling techniques to make mining more precise and efficient, from exploration to development. “Ultimately, big data is going to be transformational in mining,” Monecke said. “If you think about other industries, like the car industry or airplanes, they don’t build models anymore — it’s all computational.”

All of these changes present a unique opportunity for students. “In the mining industry itself, a lot of senior people are getting ready to retire, and there aren’t enough people to come up in the ranks,” Nelson said. “We’re getting into mines that are going deeper and deeper, and we don’t want to put people there, so we need more robotics. In mineral processing, we need more people in chemical engineering.” And with big data promising to transform the industry, she said, “We need people who understand how to write Python code.”