There is plenty of room for innovation as the so-called “Internet of Things” continues to grow, but not without increased concerns over safety and security, according to Florence Hudson of the nonprofit consortium Internet2, who met with Colorado School of Mines students and IT professionals Friday, February 3, 2017. 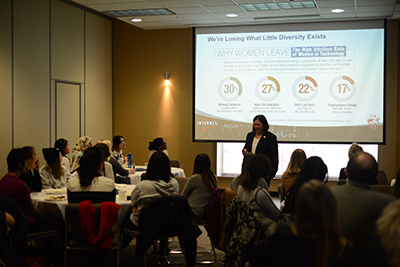 Internet2 is comprised of over 315 academic institutions—including Mines—and more than 150 research organizations in industry, networking and government developing innovations around the Internet. As senior vice president and chief innovation officer, Hudson keeps an eye on developing trends. “What we’re interested in is, where are the research and education opportunities?” she said. “Where is the economic value?” Hudson’s office also helps connect likeminded people, creating a path for academic research to be put into practice.

The Innovation Office’s three priorities, Hudson said, are end-to-end trust and security, distributed big data and analysis and the Internet of Things (IoT), which are all related. IoT is made up of interconnected everyday objects that can gather and exchange data—anything from printers than can order more ink when it’s running low, to heart monitoring implants and self-driving cars. These objects, Hudson noted, generate large amounts of different kinds of data. “We’re talking all the way up to brontobytes, 10 to the 27th power,” she said. And all that information must be kept secure.

Hudson said the two things that worry her the most concern the security of connected vehicles and health care devices. She shared the story of hackers who were able to take control of a Jeep on the highway—turning on the wipers, blasting the radio, shutting down the engine and disabling the brakes and steering. In addition to safety, consumer confidence in these products is also at risk, said Hudson, who met a person who has refused to drive his Jeep since seeing the video. “People are going to freeze,” Hudson said. On the health care front, Hudson spoke of a diabetic who was able to hack into his own insulin pump. “We need security at every level, like with castles,” Hudson said.

Other concerns include hackers commandeering IoT devices for large-scale attacks, such as the one that targeted a DNS provider in October 2016, taking down Twitter and numerous other sites for users in North America and Europe.

Despite these concerns, many academic institutions are turning their campuses into testing grounds for “smart” technologies for cities and communities. Outside of its direct benefits Hudson noted that IoT has been shown to increase student engagement in K-12 and higher education, ease the learning process and tailor education to students’ needs. “Our opportunity is in thinking of how we can use it for good,” Hudson said.

Mines Associate Professor of Computer Science Qi Han, whose Pervasive Computing Systems Group conducts research in smartphone sensing, wearable computing, robotic and wireless sensor networks and similar technologies, was eager to explore the possibility of collaborating with Internet2 and its Collaborative Innovation Community Working Group. She has since reached out to Hudson and hopes to hear more shortly.

Afterward, over lunch, Hudson spoke to students in the Women in Science, Engineering and Mathematics program, the Graduate Women Student Reading Group and the Mines chapter of the Society of Women Engineers, discussing how diversity and inclusion lead to innovation. Hudson served on the national board of SWE, where she developed programs to inspire women and girls to pursue STEM careers.

Computer science
Research
STEM
About Mines
Colorado School of Mines is a public research university focused on science and engineering, where students and faculty together address the great challenges society faces today - particularly those related to the Earth, energy and the environment.