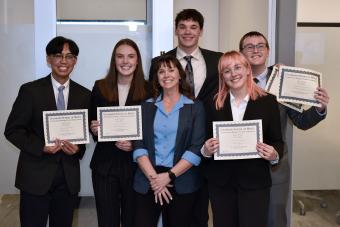 While waste management can be an important source of income for many communities around the world, it is also among the most dangerous occupations and, when not properly managed, can contribute to many environmental and social issues. How can this issue be dealt with through innovative design ideas that improve existing processes?

That was the challenge presented to Mines students in the Fall 2022 Cornerstone Design Competition, which held its final pitch event Dec. 8.

The winning team – which took home a $1,000 grand prize – focused on repurposing fabric waste to reduce the environmental impact of the textile industry. More than 5 million tons of post-consumer textile waste is sent to landfills in the U.S. every year. To help divert some of that waste, Team Cut It Out proposed using the fabric to create Oriented Strand Board, a commonly used building material. They calculated that 150 boards created through their process would prevent 1 ton of fabric from going to a landfill. Members of the winning team were Dillon Alcouffe, David Young, Lauren Quinn, Jessie Ledesma and Jakob Walker.

Third place and a prize of $250 went to Team Los Frijoles, which aimed to reduce the number of transplantable kidneys lost or damaged during transport. By adding existing perfusion technology and several layers of built-in insulation to the container that kidneys are commonly transported in, the organs would be better protected from impacts sustained during the transport process. Team members were Benjamin Andrews, Anthony Berger, Xavier Dibben, Whitney Madler and Akemi Ozoa.

The Subject Matters Experts Pick and $250 went to The Toxic Trailers and their plan for safely and efficiently mitigating acid mine drainage from legacy mines with pumped alkaline water. The special award is given by the judges to the most needed and realistic solution to real-world problems. Members of this team were Scott McDonald, Eddie Silva, Dylan Hebinck, Emi Jedryka and Sam Hansen.

Required for all Mines undergraduates, Engineering, Design & Society’s Cornerstone Design I is a semester-long, hands-on, human-centered, open-ended design project course where student teams must investigate, define and solve their own challenge within a given topic or problem space. The final competition pits the top project idea from each of approximately two dozen class sections against each other.