Colorado School of Mines Computer Science Assistant Professor Hua Wang has received an NSF CAREER Award for a research project to create a new machine-learning model for mining various kinds of data that could lead to easier, earlier and less-costly detection of neurological diseases such as Alzheimer’s or Parkinson’s. 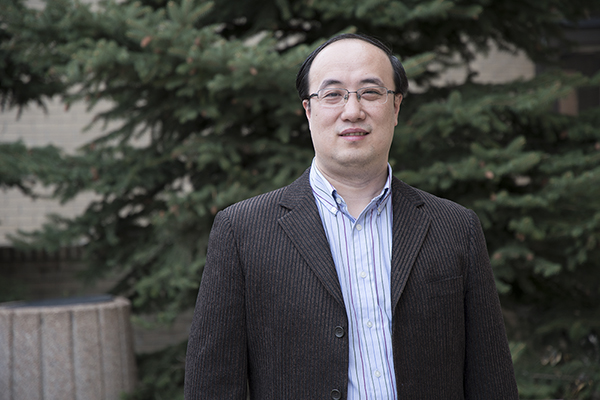 Wang will develop algorithms aimed at revealing the relationships between people’s genetic information, how their brains appear in scans that measure volume and function and their performances in cognitive tests. “The algorithms can extract information from large amounts of data that cannot be directly analyzed by ourselves,” Wang said. The data for Wang’s project will come from the Alzheimer’s Disease Neuroimaging Initiative, which collects information to share with scientists around the world.

“How to fuse all this available information from different sources is a challenging mathematical problem,” Wang said. But the payoffs could be big.

Determining one person’s full genetic profile can cost several thousand dollars. If Wang’s project determines a link, for example, between a disease and a small section of that long genetic chain, testing one’s likelihood of developing the disease would be much cheaper. “I wouldn’t mind spending a few bucks to find that out,” Wang said. “For most people, that should not be a problem.”

The project could also determine which cognitive tests are most effective in diagnosing diseases, again saving patients and doctors money, time and effort. Early detection is important in Alzheimer’s, for example, because while the disease is currently irreversible, there are therapies that can slow down its progress significantly. Discovering these relationships could also contribute to cures for such diseases down the road.

The project will contribute to the BRAIN (Brain Research through Advancing Innovative Neurotechnologies) Initiative, a public-private research partnership that includes numerous government entities, universities, corporations and other institutions. The initiative seeks to create a better understanding of how exactly the brain—with its nearly 100 billion neurons and 100 trillion connections—functions.

Wang said his method of analyzing data could also be used to improve treatment of HIV/AIDS. While there are now many drugs that can treat the disease, the virus is highly adaptable and mutates quickly. Examining genetic data can help match the right drug to the right strain.

In addition, the technique could be used to create cheaper materials for storing clean energy, Wang said. Currently, such batteries require very expensive metals such as platinum as catalysts. A composite made with iron could work, but there are an almost infinite number of ways to combine metals and arrange their atoms. “It’s almost impossible to do for human beings, and it costs so much,” Wang said. “If we can solve this problem computationally, it would solve the cost problem.”

The project will also develop materials than can be used in K-12 classrooms, introducing students to machine learning and data mining fields “while communicating the relevance of their mathematics and science classes to futures in engineering,” Wang said.

Computer science
Faculty
Research
About Mines
Colorado School of Mines is a public research university focused on science and engineering, where students and faculty together address the great challenges society faces today - particularly those related to the Earth, energy and the environment.