Chemical and Biological Engineering Associate Professor Sumit Agarwal has been awarded $615,000 over four years by the U.S. Department of Energy SunShot Initiative to develop a scalable and more cost-effective method of manufacturing ultra-high-efficiency solar cells. 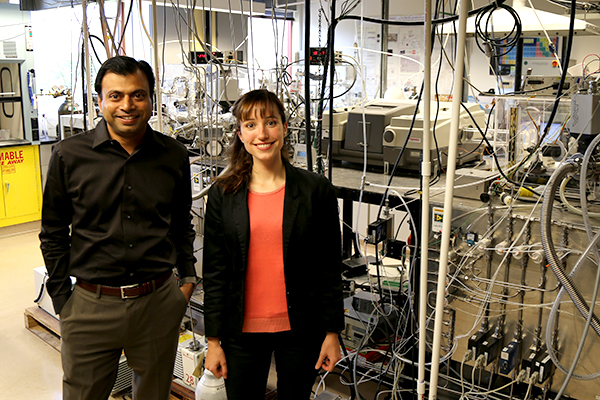 Most silicon-based solar cells in the market today have 16 to 18 percent efficiency, said Agarwal, while the maximum efficiency achieved in the lab is over 25 percent. “Our objective is to make it easier and cheaper to bridge this gap between the lab and industrial-scale devices,” he said.

Agarwal and his team, which includes postdoctoral researcher Noemi Leick and members of Silicon Photovoltaics project group at the National Renewable Energy Laboratory led by Paul Stradins, aim to fabricate solar cells with around 23 percent efficiency using their new method. The research will be performed both at Mines and NREL and will take advantage of NREL’s state-of-the-art deposition and new silicon device cleanroom facilities.

Mono-crystalline silicon (c-Si) solar cells provide the most promising pathway to electricity generation at costs that are comparable to conventional energy sources. Solar cells work by absorbing light and releasing separate positive and negative charges to create a current, and using c-Si minimizes the loss of energy from the recombination of these charges.

The efficiency of these cells is further improved by collecting both charges on the back side of the cell, as opposed to the traditional front-grid architecture, where metal contacts cover up some of the cell and prevent some light from being absorbed. 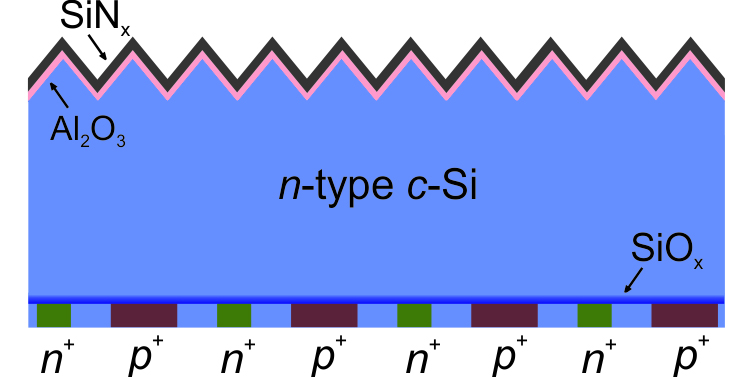 Diagram of solar cell with interdigitated back contacts.

Solar cells that use this design, however, only account for a small fraction of solar cells currently being manufactured, as they require the use of interdigitated back contacts, where the contact materials are arranged similarly to interlocked fingers. This requires a complex, repeated process where layers of material are added and sections of it are then removed.

Agarwal proposes to bypass these steps, using light and chemical vapor deposition to put down the material for the back contacts in the desired pattern. “Only the lit areas will get material growth,” Agarwal said. He believes this is a technique that can be translated into large-scale manufacturing.

In addition to the SunShot Initiative funding, the project will also receive a 10 percent match from Mines.

The grant is part of $107 million in new projects and planned funding announced by the Energy Department Sept. 14 to support clean energy innovation through solar technology. Under the SunShot Initiative, the department will fund 40 projects with a total of $42 million to improve PV performance, reliability, and manufacturability, and to enable greater market penetration for solar technologies.

In addition to the new projects, the department intends to make up to $65 million, subject to appropriation, in additional funding available for upcoming solar research and development projects to continue driving down the cost of solar energy and accelerating widespread national deployment. One of SunShot's goals is to drive down the levelized cost of utility-scale solar electricity to $0.06 per kilowatt-hour without incentives by 2020.

Chemical & Biological Engineering
Energy
Renewable energy
Research
Solar Energy
About Mines
Colorado School of Mines is a public research university focused on science and engineering, where students and faculty together address the great challenges society faces today - particularly those related to the Earth, energy and the environment.