The work of the National Alliance for Water Innovation will focus on early-stage research and development of desalination technologies that are both energy efficient and cost competitive. 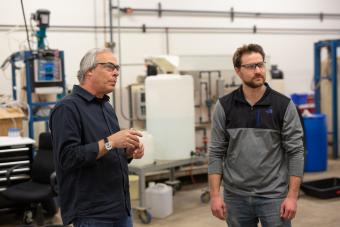 Tzahi Cath and James Rosenblum walk through the WE2ST Water Technology Hub in Denver, which will serve as a core research facility for the NAWI consortium.

Colorado School of Mines is one of 19 founding partner universities contributing to a new five-year, $100 million Energy-Water Desalination Hub being funded by the U.S. Department of Energy to address water security issues in the United States.

NAWI’s work will focus on early-stage research and development of desalination technologies that are both energy efficient and cost competitive. Those technologies will target "nontraditional" water sources -- seawater, brackish water and produced waters -- for multiple applications, including use in municipal, industrial, agricultural, utility and oil and gas.

"Water and wastewater treatment can have high energy demand and production of energy requires large quantities of water," said Tzahi Cath, professor of civil and environmental engineering at Mines. "To solve many of the energy-water nexus problems, substantial research is needed to reduce energy and water demands and increase the purity of water in an era that has seen emerging and persistent contaminants in the environment.

Mines was one of the first universities to join NAWI, and its state-of-the-art WE2ST Water Technology Hub in Denver will serve as a core facility for the research consortium, said Cath, director of the WE2ST hub.

Capabilities of the WE2ST Hub include pilot and demo-scale testing of conventional and advanced water treatment technologies and on-site water testing of water quality. The 10,000-square-foot facility was made possible by generous support from NGL Energy Partners and ZOMALAB and opened in April 2019.

“Mines is already carrying out innovative research, integrating renewable energy such as solar and ocean waves coupled to desalination processes in collaboration with NREL and the U.S. Bureau of Reclamation. Additional research currently conducted at the facility includes advanced treatment of oil and gas produced water, removal of emerging contaminants such as PFAS from groundwater, and direct potable reuse of reclaimed water,” Cath said. “Researchers at Mines will be critical to the success of NAWI in the next five years and beyond.”

“ZOMALAB is excited to see WE2ST contribute to NAWI’s water desalination hub,” said Valeria Alberola, CEO of ZOMALAB. “With increasing water scarcity around the world, and especially in our home regions of Colorado and Chile, desalination is a crucial source of water. Accelerating innovations that result in lower cost solutions and conserve energy is a key strategy in ZOMALAB's broader efforts to support long-term water management and sustainability.”

Among the research topics that Mines faculty will be involved in as part of NAWI are the development of new materials for separation processes, computational fluid dynamics to reduce energy and fouling on membranes, data-driven monitoring and control of processes, and novel separation and purification processes for treatment of contaminated industrial wastewater.

Founded in 2017, NAWI consists of the central research consortium and the larger NAWI Alliance, which includes more than 180 U.S. public- and private-sector organizations. The research consortium includes the four national laboratories, 19 founding university partners including Mines, and 10 founding industry partners.  For information about NAWI, go to www.nawihub.org. 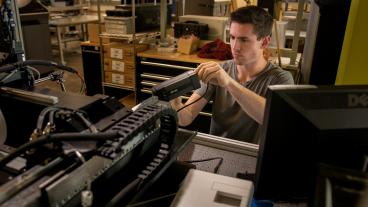