David Frossard was an idealistic, small-town newspaper reporter with a psychology degree when, in pursuit of a new adventure, he applied to join the Peace Corps in 1985. “If you had a college degree and some basic science knowledge, you were considered trainable,” recalls Frossard, who now works as a web administrator for Mines Computing, Communications and Information Technologies and teaches a humanitarian engineering course. “I said, ‘Send me anywhere. I’ll do anything you think I can do.’ It was the luck of the draw.”

He landed in a mountainous region of the Philippines, tasked with helping villagers establish tilapia ponds. The work was rewarding and, as he puts it, life-transforming. But the village turned out to be too cold for the fish he was trying to breed. In retrospect, he says, “My project was a failure. I came back from Peace Corps the first time asking: ‘How come so many projects fail?’”

Fast-forward to today and Frossard, Mines and the Peace Corps have all come a long way in answering that question and are taking bold steps to improve the success rates and sustainability of community development efforts abroad. In 2014, more than 50 years after its founding, the Peace Corps overhauled its application process, enabling prospective volunteers to, for the first time ever, choose their country of service and apply to a specific program they believe they will be best suited for. Then this past fall, Mines became the first higher education institution in Colorado to establish a Peace Corps Prep program, an undergraduate program aimed at better prepping would-be volunteers for the unique cultural and technical challenges they’ll encounter if they join. Those who complete Peace Corps Prep get a certificate from the Peace Corps, a notation on their Mines transcript and a good shot at a modern-day Peace Corps that has become increasingly competitive to get into.

“Peace Corps Prep lets us take students years before they apply and make sure they get the skills Peace Corps is looking for,” says Frossard, who got a PhD in anthropology after his first Peace Corps stint, returned in 2003 to help establish a wildly successful aquaculture project in Zambia and is now co-coordinator of the Mines prep program. “We want to make sure the courses you take, the languages you take, your leadership activities and your volunteer activities all lead you in a direction to make you an effective volunteer.”

Mines professor Juan Lucena, co-coordinator of Peace Corps Prep, stresses that while the formal partnership with the Peace Corps is new, Mines has been churning out uniquely qualified volunteers for years via its humanitarian engineering program. Established in 2003, the program aims to explicitly connect the technical aspects of engineering with the humanities and social sciences, exposing students to the oft-neglected subject of social justice and cultural, gender, economic and environmental sensitivities that often collide with development projects.

One course in particular, Engineering and Sustainable Community Development, is “maybe the most perfect Peace Corps prep course ever created,” says Frossard, who has taught the class. It explores the unique challenges that can arise when an engineer is trying to sensitively develop a small-scale project (such as a new water or sanitation system) and be sure it’s still in use years down the road.

“Many engineering students have a tendency to assume money is endless. But when you are doing a small-scale community development project, the Home Depot is not just around the corner,” says Lucena. “You have to know how to design under precarious circumstances, with low budgets, for multiple stakeholders. And you have to think about big concepts like poverty, inequality and social justice.”

Peace Corps spokesman David Reese says Peace Corps Prep was founded in 2007, to draw more students with foreign language fluency, intercultural competency and leadership skills and to introduce the program to populations on college campuses that might not otherwise think of serving. For the past three years, more than 20,600 people have applied annually to Peace Corps, and only about 6,000 currently serve. “We’re focusing to a greater degree on qualified diversity and applicants over age 50, as well as those individuals who have the skills to match hard-to-fill positions,” says Reese.

The takeaway: It’s competitive. And those with a Peace Corps Prep certificate are about twice as likely to apply, get accepted and go.

With a strong humanitarian engineering curriculum already in place, Mines is a “wonderful fit” for Peace Corps Prep, says Reese. “In the developing world there just is not enough manpower in the engineering field to currently fill the need. Our partners, such as Mines, are critical to filling that void.”

Molly Jane Roby ’11 graduated from Mines long before Peace Corps Prep came to campus, but in many ways her experience reflects what newcomers to the formal program might be able to look forward to. She had a mild interest in the Peace Corps when she entered college, but after taking Engineering and Sustainable Community Development and hearing Frossard talk about his experiences, the deal was sealed.

“When my husband asked me to marry him that year I said, ‘Okay, but we’re going to the Peace Corps. Either we go together, or I go by myself,” she recalls.

Her pursuit of a humanitarian engineering minor directed her toward classes and volunteer projects that forced her to explore the ethics and human impact around projects—not just the technical details. When it came time to apply to the Peace Corps, she felt as prepared as she could be.

“I don’t think anything can completely prepare you for the Peace Corps. There were certainly times that we were miserable and looked at each other and said, ‘What the hell are we doing here?’” Roby says. “But being a problem-solver and having confidence that you can get through it—that there is always an answer to the problem—really helped me.”

In February 2012, she arrived in Ghana, where she and her husband spent two years working on water and sanitation projects. They lived in a small concrete structure with a corrugated tin roof on a school campus, using bucket-flush toilets that had been installed but were not actually hooked up to water (due to an unsuccessful previous development project).

Roby’s roles varied over the years. At one point, when there was an instructor shortage, she stepped in and used her math and science skills to teach. At another point, she worked on a latrine project in a tribal village, grappling with a delicate problem to which only those who have done international development work can truly relate. “For one of the tribes, the concept of pooping on someone else’s poop was equivalent to cursing them. The concept of a latrine for them was just unfathomable,” she recalls, noting that they had to have numerous conversations before arriving at a different plan that worked for the tribe. “Just throwing money at the scenario and building a latrine without having someone on the ground to ask lots of questions just doesn’t work.”

In another instance, she worked with a group of students to address a dangerous sanitation issue at their school. Trash riddled the ground, foraged by wild goats, cows and chickens.  Rather than opting for a technical fix, Roby helped the students use enamel paint and discarded boxes to create dozens of trash cans, which they distributed first throughout the community, and then in their own villages.

“The idea was to empower these kids to do the education on their own and take it back to their communities,” Roby explains. “We wanted to be able to walk away and know they could keep doing it without us.”

In the years that followed, the students did just that. And the whole project cost almost nothing.

“We did our entire service without writing a single grant or asking for a single penny. I’m very proud of that,” says Roby, who now works for environmental consulting firm Tetratech.

Roby says her Peace Corps experience taught her patience, flexibility and resourcefulness—key attributes for an engineer required to work on a team. For other Mines students, like Whitney Svoboda ’08, the Peace Corps offered a chance to see the world and gain a multicultural perspective they didn’t have before. Svoboda was applying for jobs her senior year at Mines when she began to feel a twinge of dread. “I thought, ‘I am going to go work in a lab for 40 years and then retire?’ I was only 21. I wanted to do something different with my life,” she says. She applied to the Peace Corps, got in and spent two years teaching in a sweltering village a bumpy seven-hour bus ride from the capital city of Burkina Faso, Africa.

Going in, she had little travel experience and didn’t speak a word of French. “I wasn’t very prepared,” she concedes, lauding the new Peace Corps Prep program as a useful addition. She thrived regardless, teaching English and helping turn a dilapidated building on campus into a library that is still in use today.

Coming out, she had an insatiable travel bug and a knack for making things happen in even the most challenging of environments. She now works as a field engineer for oilfield services company Schlumberger, a job that has taken her to Equatorial Guinea, Abu Dhabi, Norway, Spain and elsewhere.

“The Peace Corps completely helped me get my job,” she says. “I said, ‘You can send me anywhere. I used to work in Africa.’”

Since 1961, the year the Peace Corps was founded, 89 Mines alumni have served as volunteers in the Peace Corps, with four currently serving in Tanzania, Uganda, Namibia and Paraguay.

Frossard and Lucena hope the new Peace Corps Prep program will encourage more Mines students to consider joining the Peace Corps. But they also hope to use it as a recruitment mechanism to draw more engineering students—tantalized by the prospect of serving overseas after college—into humanitarian engineering classes and perhaps adding a humanitarian engineering major. (In 2017, the program will also establish a new minor in leadership in social responsibility).

“I think Peace Corps Prep is going to give an additional incentive for students to complete the minor and have something very concrete to look forward to at graduation,” says Lucena. “They will be able to say, ‘I have a real chance at being a Peace Corps volunteer and can put into practice everything I learned in the humanitarian engineering classroom.’”

Melissa Breathwaite is sold. A sophomore pursuing a major in environmental engineering and a minor in humanitarian engineering, she was among the first to sign up for the Peace Corps Prep program. She’s not certain yet what she wants to do with her career long-term: maybe research, maybe graduate school, maybe serving as a liaison between oil and gas companies and the communities in which they operate.

But she does know what she wants to do right after graduation: Join the Peace Corps. 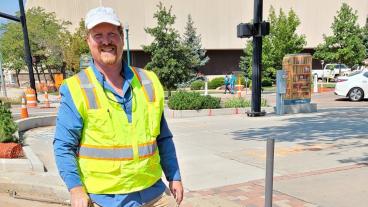 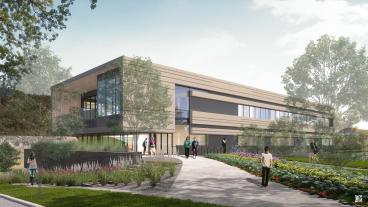 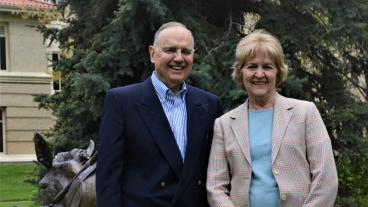