Finding your way around a new building can be a challenge – it’s not like you can just pull up your smartphone’s map app and pinpoint your location like you would outside. 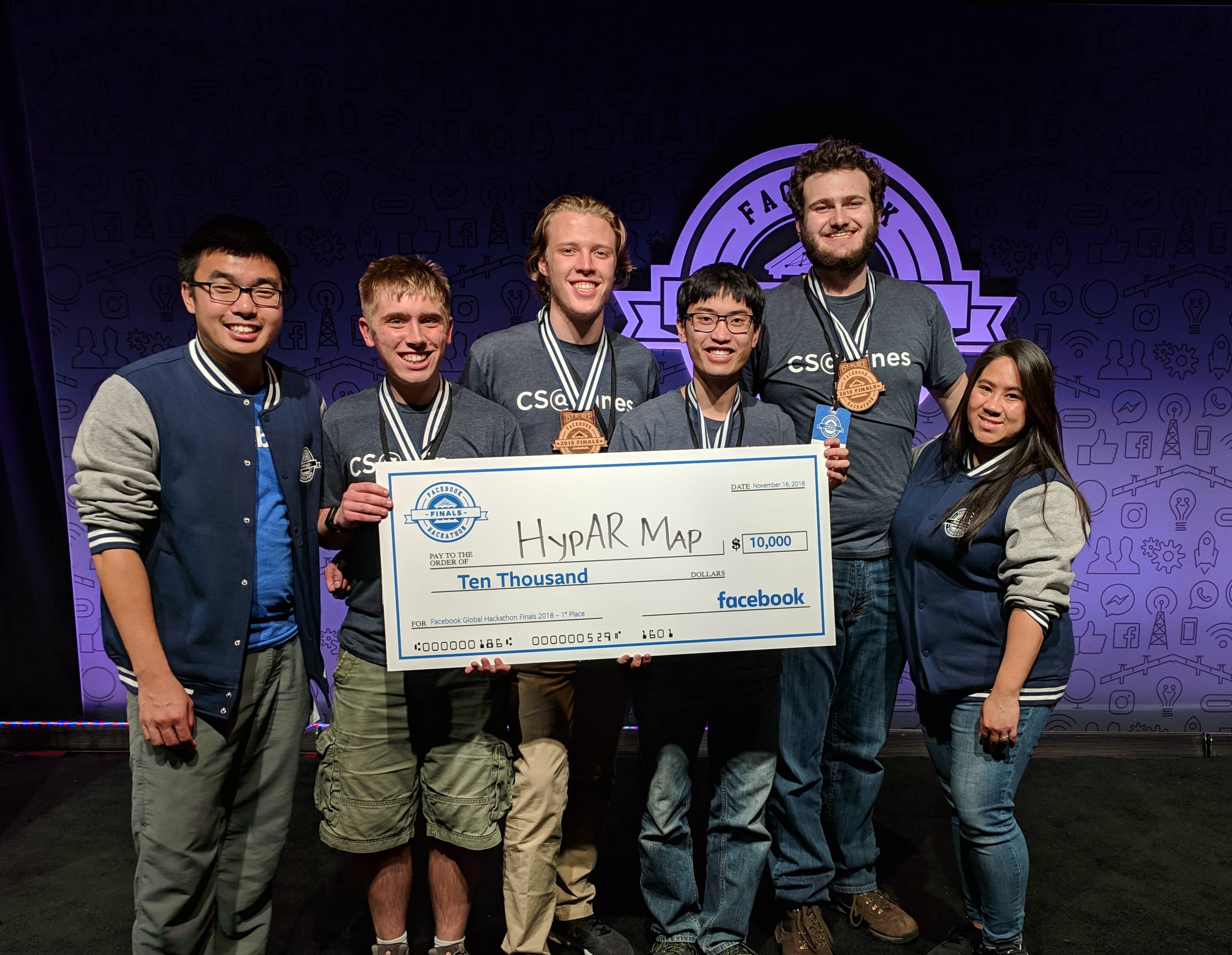 “A lot of companies – Google, Google Maps, Facebook – have been working on the challenge of indoor navigation for a long time,” said Sam Sartor ’18, who graduated in December with a bachelor’s degree in computer science. “GPS data only gives you plus or minus 10 meters, which within in a building is a lot.”

Sartor and three of his fellow Mines students recently developed an app that could help make indoor navigation a challenge of the past – and it won them the $10,000 grand prize at the 24-hour Facebook Hackathon on Nov. 16 in Menlo Park, California.

HypAR Map beat out 20 other teams from around the world to claim the top spot, a field of competitors that included students from Singapore, France, Poland, Australia, Canada, Mexico, Brazil, Chile, Israel and some of the best tech schools in the U.S. Each team had to win another hackathon earlier this year to qualify for the Facebook-sponsored event.

Sartor, computer science graduate student Sumner Evans, freshman Fisher Darling and electrical engineering junior Robby Zampino won the Facebook Best Social Good Hack at MHacks, a 36-hour hackathon at the University of Michigan in October, to earn their spot. The data transfer network they developed there operates “like an Amazon Locker for data for places that don’t have high-bandwidth internet,” Evans said.

At the Facebook finals, they were inspired by the maps they saw embedded in the ground all over the tech giant’s campus to build an Android app that allows users to create an interactive indoor map using a photo of a floor plan and augmented reality.

“The idea was if you were in an unfamiliar building or unfamiliar place and you needed to figure out where you were and where other things were relative to you, you could snap a picture of something like a fire escape map or any other map you could find,” said sophomore Jack Garner, who took Zampino’s place on the team at the Facebook finals. “Then after a short set-up phase, you could have the map on your phone and it would rotate based on where you were facing, and it would also put a marker on the map where you were in the building.”

To accomplish that, their app uses photogrammetry and simultaneous location and mapping using camera data, building off work that Google developers have already done with AR Core.

“We still had to align the walls and solve for the position. That’s what was so unique about it – and something Facebook had never seen before,” Sartor said.

Before arriving on the Facebook campus, none of the students were very familiar with the Android platform or the coding language they had to use, but they all said that’s part of the appeal of hackathons.

“It’s really fun to work in a group, from scratch, on a project where everyone is in the same boat,” Garner said. “When we started, we were jumping into things we’d never done before. So, we’re all Googling things and trying to learn and sharing what we found.”

“It is fun – you get to do the whole software development process and you get to do it with people you enjoy being with,” Evans said.

With the exception of Darling, they’re all Mines hackathon veterans, too. Evans and Garner were part of the team that won HackCU earlier this year, while Sartor and Evans were teammates on the winning team at the Xilinx Hackathon last year. Sartor was also on the second-place team at MinneHack in January.

Darling, for his part, said he loved the unique learning environment that hackathons offer. His first hackathon ever was MHacks, his second the Facebook finals.

“The fast-paced nature and frantic rush to learn and hack together a legitimate product is an amazing experience,” he said.

In addition to the $10,000 prize, the Mines students each won an Oculus Rift with Touch virtual reality headset. Their big fake check is now hanging on the wall of a computer lab in Brown Hall, Evans said.

“Getting that through airport security was fun,” Evans said. “We walked onto the plane and they’re like, ‘Oh, umm why don’t I put that in the coat closet? Congratulations!’”

It was great to win, Sartor said, but so was being in the same room with so many great coders and seeing the amazing things they came up with.

“We were very honored that Facebook chose us. Every single project had its own super cool thing that it did,” Sartor said. “Facebook has a real hackathon culture – it’s really important to them and it’s how a lot of their products first got developed and prototyped. It was really cool to have that experience in a place where that is important.”

And while their app still has a few bugs – the team actually got lost the day after the competition in the Computer History Museum because of one of those bugs – Sartor said he’s proud of what he and his teammates developed in just 24 short hours.

“It does work,” Sartor said. “I was just playing around with it in Arthur Lakes Library. It’s so confusing in there and I saw a map on the wall and was like, ‘Oh, I can use this!’ So, I snapped the map on the wall and it was laggy as heck because my phone is from 2015, but it worked.”

But, he added, “it’s not quite App Store ready yet.”