The Mines team outscored the second-place team 150 points to 45 points to secure the win – but their day almost ended before it began when their bot failed to turn on in the first round. 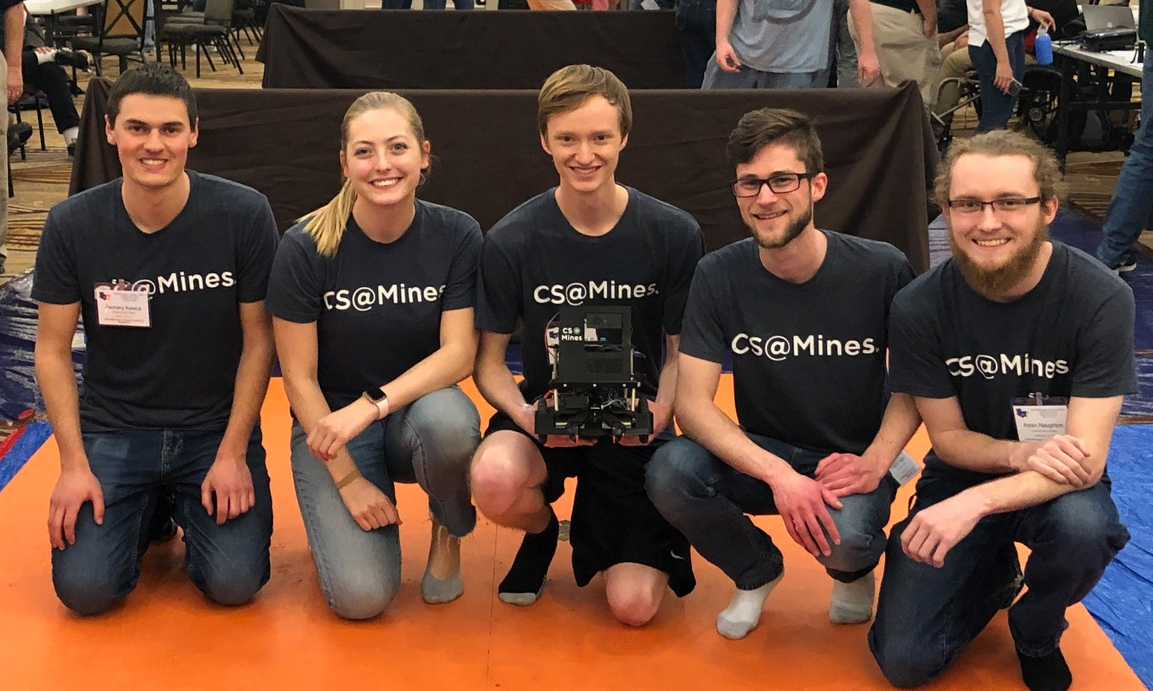 On the surface, the task facing students at the Institute of Electrical and Electronics Engineers (IEEE) Region 5 Student Robotics Competition was simple: Design a robot that could navigate obstacles, pick up small objects and then sort the objects into separate containers.

Of course, it was anything but, since that robot also had to be fully autonomous.

"We had to write all the code and then all we were allowed to do at competition is press the start button," said Easton Bornemeier, a senior majoring in computer science.

Bornemeier and his teammates from the Mines Robotics Club were up to the challenge. Their 3D-printed Mars rover rolled to victory in the regional competition, held April 6 in Lafayette, Louisiana. Region 5 of IEEE spans Colorado, Texas, Missouri, Kansas, Oklahoma, Arkansas and Louisiana, as well as parts of Wyoming, South Dakota, Nebraska, New Mexico and Illinois.

The Mines team outscored the second-place team 150 points to 45 points to secure the win – but their day almost ended before it began when their bot failed to turn on in the first round.

"We were devastated," Bornemeier said. "We thought we were disqualified."

It was totally unexpected, too – the night before, the team had stayed up until 4 a.m. running practice rounds and the bot was firing on all cylinders.

"The night before, we figured out we were the only team who could accurately place the blocks in the slots," said Kristin Farris, a senior majoring in computer science. "We knew if our robot didn't have a catastrophic failure, we'd be great… and then in the morning, we had a catastrophic failure."

The rules stated that teams must score points (earned both by picking up and correctly sorting blocks on the game board) in the first round to move on to the second. But when only one of the 30 competing teams scored any points in the first round, organizers called for a redo and the Mines team was back in the game.

"This year, in contrast to previous years, it was required to use some sort of computer vision. You couldn't do it with other kinds of sensors. You needed to use a camera to image the environment," Bornemeier said. "That gave us a huge advantage because most of us have a computer science background."

Computer vision is a form of artificial intelligence in which computers use camera images and the information contained in their pixels' RGB values to "see" the world around them.

"There are a lot of things we take for granted with your eyes – shadows, being able to pick up grayscales," Bornemeier said.

"A computer just sees an array of numbers," Farris said.

The team achieved functional computer vision using just a Raspberry Pi and an Arduino – less than $50 in computing hardware. It helped, too, that both Bornemeier and Farris had taken the Computer Vision class at Mines and could build from that foundation, he said.

Rounding out the team were computer science senior Zach Kasica, computer science junior Aidan Naughton and electrical engineering senior Stephen Agee. The first-place prize was $1,300 split among the team's five members, plus $500 for the IEEE Student Chapter at Mines.

"Autonomy is where robots are going in the future," Farris said.

Watch the Mines robot in action during the competition: