A Colorado School of Mines professor has been awarded more than $1.5 million over three years to develop a membrane that will improve the performance of industrial-scale redox flow batteries, which would allow widespread use of intermittent energy sources such as solar and wind on the U.S. grid.

A flow battery or redox flow battery is a reversible fuel cell that converts electricity into chemical form for storage, and back into electricity when needed. The charges are stored in liquid electrolytes held in tanks; to generate electricity, the electrolytes are pumped through a membrane that lets certain ions through and rejects others to create a charge. However, membranes currently in use don’t do this as efficiently as desired. 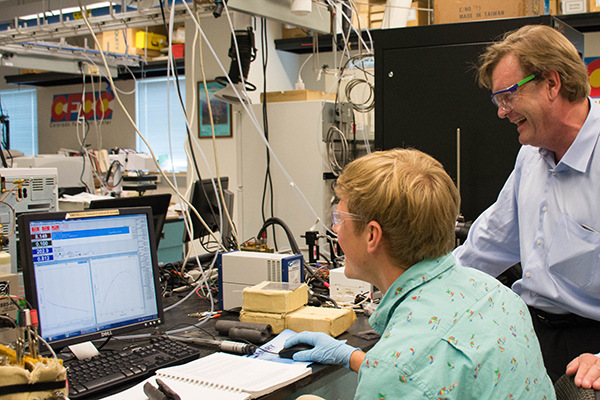 “What we want in a redox flow battery membrane is something very, very conductive in one ion, and will exclude everything else,” Herring said. The efficiency of these batteries drop precipitously as soon as any ions that should be excluded are allowed in. “We’re aiming for conductivity that will be a world record, but at the same time exclude other ions at a rate of 99.95 percent,” Herring said. While that sounds incredibly difficult, “we have a plausible route to do this,” he added.

Instead of using traditional sulfonic acid chemistry, Herring and his team are using inorganic superacids – the most acidic compounds known to man. “The problem is they’re inorganic and extremely water-soluble, so we devised a way, working with 3M, to immobilize these acids in films,” Herring said.

Not only has this led to record proton conductivities, but also to membranes that can perform under adverse conditions – redox flow batteries are very wet and can reach high temperatures. “Andrew [Motz] can boil them now and most of it stays there, which was not true before,” Herring said. His team is now working to combine various existing technologies to improve the membranes’ exclusionary properties.

The next two years of the project will be devoted to achieving all the other parameters necessary to put the membranes in a real device. The team has already made progress in that regard – attaching acids to a polymer used to be a seven-step, inefficient process, Herring said. “Now it’s a three-step, very efficient process,” with two steps taking place in just one container. They’ve also figured out how to accomplish this with less solvent, making the process greener.

Herring said improving the efficiency of these membranes is a crucial issue in the field of renewable energy. In Europe as well as Japan and Korea, where there’s an overcapacity of renewable energy that needs to be stored, “this is absolutely the biggest issue,” he said.

Improved membranes would allow the use of iron in flow batteries instead of vanadium, which is mined mostly in South Africa, China and Russia and whose use is considered uneconomic in North America. And with cheaper industrial-scale flow batteries, energy companies can build a wind or solar farm without also having to build a traditional power plant to make up for when the wind isn’t blowing or the sun isn’t shining.

“We do need storage desperately,” Herring said, “because a lot of states have put in renewable energy standards and wind farms are popping up everywhere, but it has to compete.”

Chemical & Biological Engineering
Energy
About Mines
Colorado School of Mines is a public research university focused on science and engineering, where students and faculty together address the great challenges society faces today - particularly those related to the Earth, energy and the environment. 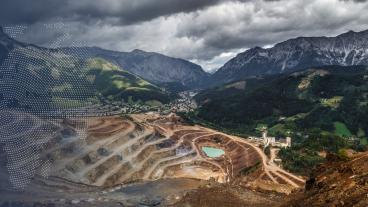